8 Pieces for Single Listeners / You Never Give Me Your Pillow 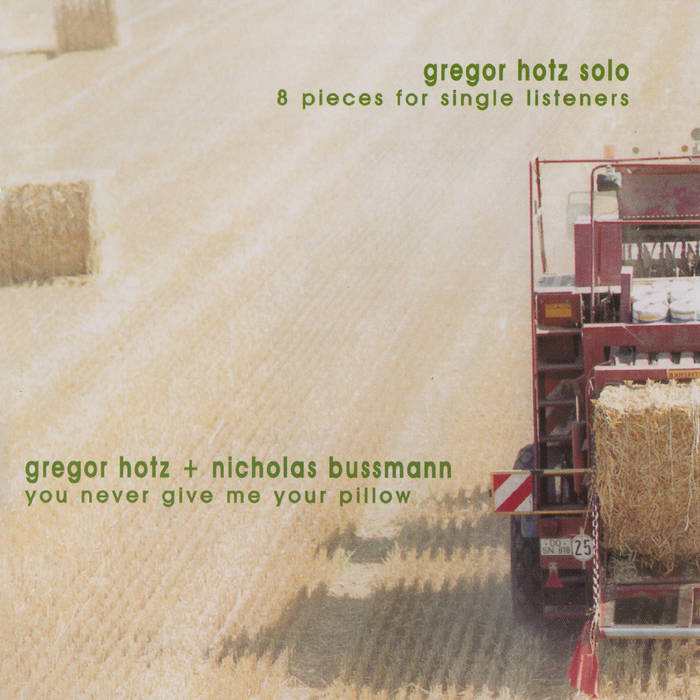 "Swiss reedist Gregor Hotz has spent his life in service to the development of an improvisational language for the soprano and bass saxophones and the alto clarinet. This has been showcased previously on recordings with Steve Lacy, Wolfgang Fuchs, and Hans Koch. On 8 Pieces for Single Listeners, Hotz uses all three horns to demonstrate a unique, and somewhat disquieting, phraseology. No matter which horn he chooses, his command, for such a young player, is remarkably authoritative. On the duo pieces with Bussmann, Hotz is allowed a certain lyrical freedom he was unable to grant himself on the solo work. Given the cello's vast sonorities, Hotz solos like a pianist — Herbie Nichols comes to mind — moving from arpeggio to micro phonic tonal cluster to open, ringing notes. The deep atonal swing in the architecture of "Part 4" is solid evidence of the sense that Hotz has of timing and reserve. This is a brilliant and daring — if reserved and lovely — recording by a true, original voice on the free improv scene."
- All Music Guide

"Gregor Hotz and Nicholas Bussmann actually play as a duet on only half this CD, with the first eight pieces featuring Hotz as a soloist. He plays soprano and bass saxophones and bass clarinet with the studied tonal manipulations of Evan Parker but the with the pacing of Wolfgang Fuchs, which is to say that where Parker sprints like a twenty-legged gazelle, Hotz more measurably strolls. He flutters, scorches, and extends tones. With Bussmann, Hotz seems ever more curious about the group sound, which whistle and scour and float ethereally. Bussmann is a quiet interlocutor here and raucous there, always ready with some speedy, extended range bowing to dizzy the ears."
- Coda

"This is, in essence, two separate recordings, one a solo effort by reedman Gregor Hotz, the other a six-part duet by Hotz and cellist Nicholas Bussmann. Hotz is an interesting soloist, particularly on alto clarinet and bass sax. Those familiar with the solo work of Braxton or Parker (or of the navigation complexities of space travel) will know how far afield the most minute variations can take one when there are no walls or Jersey Barriers around. The man isn’t only a fascinating character: he can play."
- Cadence

If you like 8 Pieces for Single Listeners / You Never Give Me Your Pillow, you may also like: