A Doughnut in One Hand 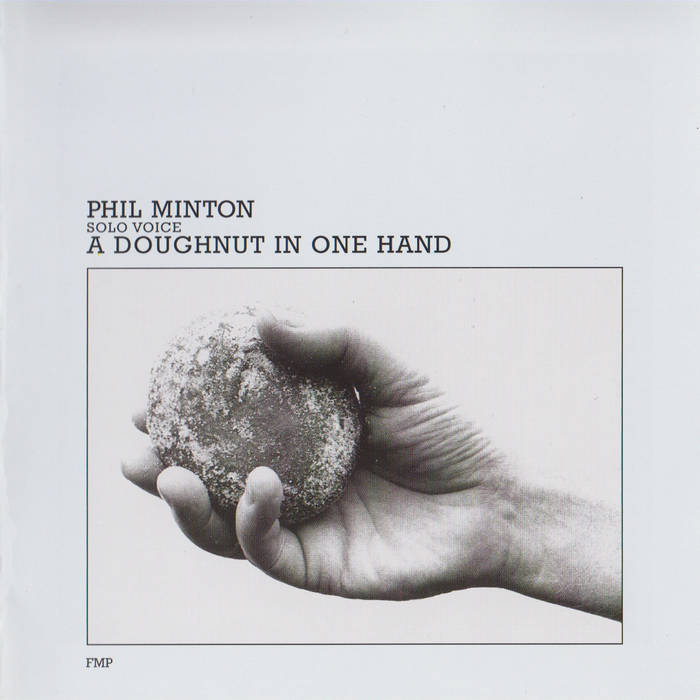 All music by Phil Minton.

"[A] disciplined and rigorous sequence of miniatures...an hour of spectacular vocal acrobatics... It isn’t easy listening, but once one grasps the relationship between Minton’s highly refined art and the cracked, artless singing of pub amateurs, workmen and tramps, it has a Beckettian purity and warmth. Whatever its lineage, it is unmissable." -- Brian Morton/Richard Cook, Penguin Jazz Guide: The History of the Music in the 1001 Best Albums

"If I may be permitted to quote my liner notes, I find Minton’s work here to be 'of riveting intensity, an exploration of feelings that elude ready (or perhaps any) verbal articulation, feelings sensed but not seized. The work is ultimately, perhaps, less about emotion than about spirituality, explored within pure musical terms, the elements of timbre, dynamics, and rhythm approached without reference to time, bet, tune, or tonality'." -- Paul Dutton, CODA

"There’s no language as we know it on this disc. Instead, there are murmurings in strange, invented tongues, some of which resemble English. There’s one track on the disc where Minton’s sounds like a drunk on the Bowery – he’s a Tuvan on Thunderbird, he’s a preacher on ludes. He makes the sounds of a Beckettian character, flat on his stomach trying to roll over onto his back, in a ditch by the side of the road. It’s desperate stuff. It’s also powerfully moving. I can’t think of anyone who’s explored this end of the spectrum of human-produced sounds. And far from being a novelty record, there’s truth in this – maybe too much. Music in this century has shown us the potential for just about every sound under the sun to be considered music – funny how it’s scrupulously avoided the sounds of disgust. Minton, for the first time, forces us to ponder the musical qualities of noises that we’d rather not deal with and that fact alone makes this an important recording." -- New York Press

"In many ways Minton is developing a solo vocal vocabulary comparable to the a-cappella techniques of reed innovators like Anthony Braxton and Roscoe Mitchell. Minton sounds like he’s operating in another century if not from another planet." -- Cadence