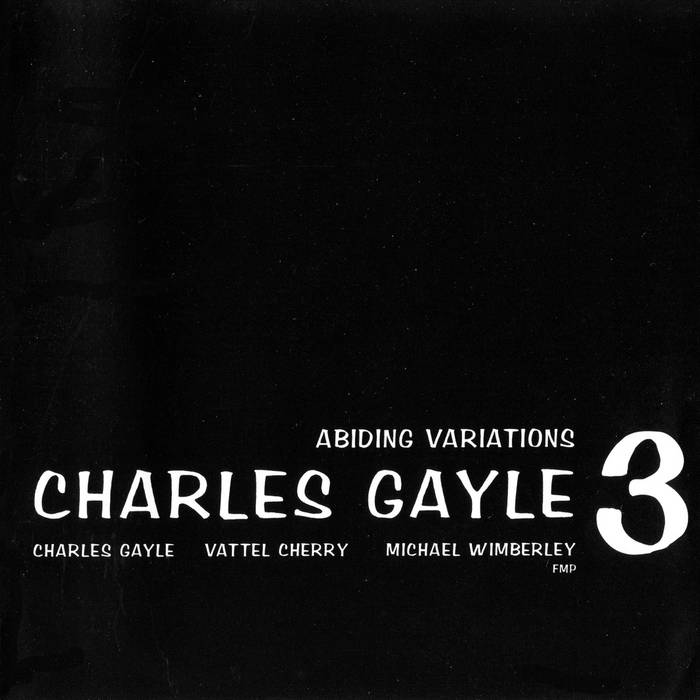 John Cratchley Perhaps one of the great available documents of free improvisation in existence...Charles Gayle's Trio at their transcendent best...very good to have this available on BC for a whole new audience...on the list of "must hear's"...

All music composed by Charles Gayle.

"Charles Gayle is perhaps the most iconoclastic jazz musician of the 90's. Much of the material on Abiding Variations is anchored in recognizably Ayleresque melodic cores. Gayle expertly employs these fragments as pulpits for the intricately structured swathes of sound that blast forth from his seraphic saxophone. Cherry and Wimberley strive admirably to match his inventions and sculpt a spacious rhythmic landscape punctuated by solo contributions of their own. Gayle's bass clarinet is given less girth than his tenor, but his creations on the deeper reed deliver an equal level of intrigue. This is a disc to seek out and delve into at length." - Derek Taylor, All About Jazz

"This is one of the trailblazing saxophonist's most accessible sets, as he turns down the volume somewhat, focuses more on the melodic side, and displays a slightly different dimension to his playing. LHe blows mostly tenor saxophone (with some bass clarinet, but no piano or vocals), and is backed only by bassist Vattel Cherry and drummer Michael Wimberley. Not breaking new ground, but showing a special side of Gayle, this CD should be a welcome addition by his devotees." - All Music Guide

"Abiding Variations features Gayle out front in a noticeably toned down set: toned down, but not less intense, and not less fascinating than any of Gayle’s previous recordings. Gayle blows his customary tenor on most of the tracks. But he is noticeably more melodic, though not less free. The level of energy rarely lets up, even at slower tempos and generally tempered dynamics. His bass clarinet solo on “Variation III” is a stunning example of his ability to transform and build on slow, mournful soft tones to create intense coloring." - Cadence

"Throughout the seven “variations”, Gayle opens with a theme, a short hymn, an Ayler-esque call, which he then splits apart with low growls or screaming overtones. His clarinet work is downright beautiful, and the studio recording presents him in an unusually introspective mode: “Variation III” has Gayle spewing short, fragile bursts of sound, a kind of subdued, pensive melody. While a few variations provide more typical Gayle heat – “Variation II”, for example – even they seem tempered by a will to mix the near hymnal with the white fury." - Jazziz

"Just to prove that he really is carrying on the spirit of Albert Ayler, look no further than this new FMP disc, which is a studio set from 1993, recorded after Gayle’s concert in honour of Albert Ayler in Berlin. This is a much less hi-energy display from Gayle, serving to make his spiritual approach more pronounced. Captured in intimate close-up, with Vattel Cherry (bass) and Michael Wimberley (drums) – who are both excellent – the lion roars. Together, they show the importance of being earnest." - Rubberneck