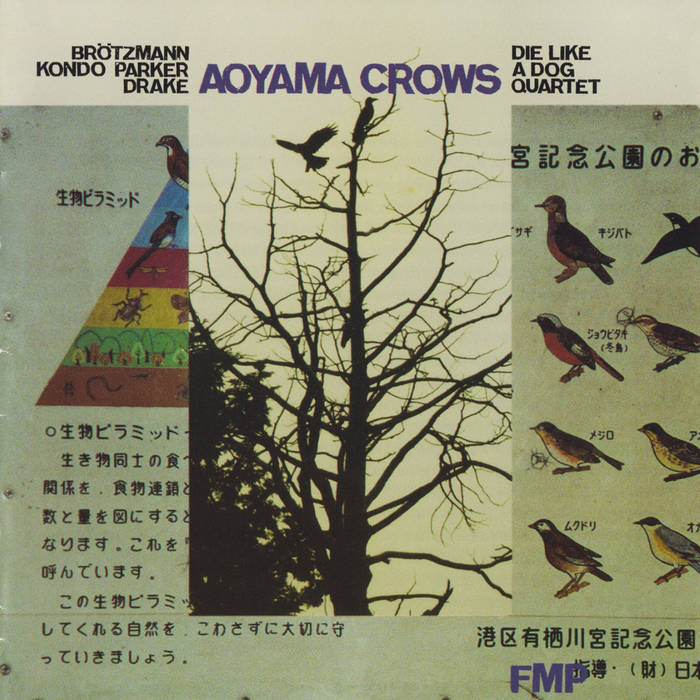 All compositions by Peter Brötzmann.

"The fifth release from Brötzmann’s Die Like a Dog Quartet, Aoyama Crows is like the group’s previous recordings a document of a live concert. Flying in from Sweden, Tokyo, and New York to convene at the 1999 Total Music Meeting in Berlin, the musicians were weary and jetlagged by the time they hit the stage; nonetheless, they turned in a vibrant and inventive performance.

It’s a band with a fascinating internal balance. Toshinori Kondo’s sardonic electrified trumpet buries shards of Milesish soliloquizing under swathes of caricature and distortion. He’s a very fine player, achieving fantastically controlled melismatic effects, but is often quite funny, too: he can sound like a manic parody of cheapo sci-fi film music or like a teenage guitarist cranking every effects knob to max. He’s a stimulating foil to Brötzmann – the smile to his frown, perhaps. For me, Brötzmann is not (at least nowadays) primarily an aggressive player. He gets a lot of different sounds out of his instruments: on Aoyama Crows he can sound quizzical on tarogato, bruised and bruising on tenor, and quite lyrical on clarinet. But always what I hear in his music is a central melancholy. The actual notes he plays – often the simplest repetitions and trills – are like organic extensions of his juddering vibrato and richly overblown sound.

Supporting the horns is the impeccable rhythm section of William Parker and Hamid Drake. Parker’s bass playing is intense and inscrutable, sometimes almost private, while Drake manages to be at once powerful and yet never heavy. He’s perpetually breathing light and air into the music. Even at his freest he’s always strongly rhythmic, and there are on the other hand some extended sequences on this CD where bassist and drummer drop into a groove.

The principal, hour-long performance ends beautifully with a dancing quasi-calypso, on which Parker sounds like a thumb-piano plucking out a pentatonic scale. This unwontedly lovely conclusion is then countered by a characteristically fearsome and dour three-and-a-half-minute encore. It’s an apposite colophon to a vintage performance by one of the finest free-jazz small groups of the 1990s."—Nate Dorward, CODA

"Aoyama Crows is a satisfying and entertaining album — yes, entertaining, let's not be ashamed of it, please!"—François Couture, AMG

"On Aoyama Crows, recorded at the 1999 Total Music Meeting in Berlin, Kondo occasionally lends the proceedings a gritty '70s-vintage Milesian flavor; but far more often than not, Kondo's ricocheting smears and blasts have no jazz antecedent whatsoever. Conversely, Kondo's presence tends to prod Brotzmann toward mournful chant and work-song-related thematic fragments that countervail the infinite skittering of Kondo's digitally delayed textures, which is the case deep in this gripping set."—Bill Shoemaker, Jazz Times

Recorded live by Holger Scheuermann and Jost Gebers on November 3rd, 1999, during the Total Music Meeting at the Podewil in Berlin.

Mixed and mastered by Jonas Bergler.
Produced by Peter Brötzmann and Jost Gebers.