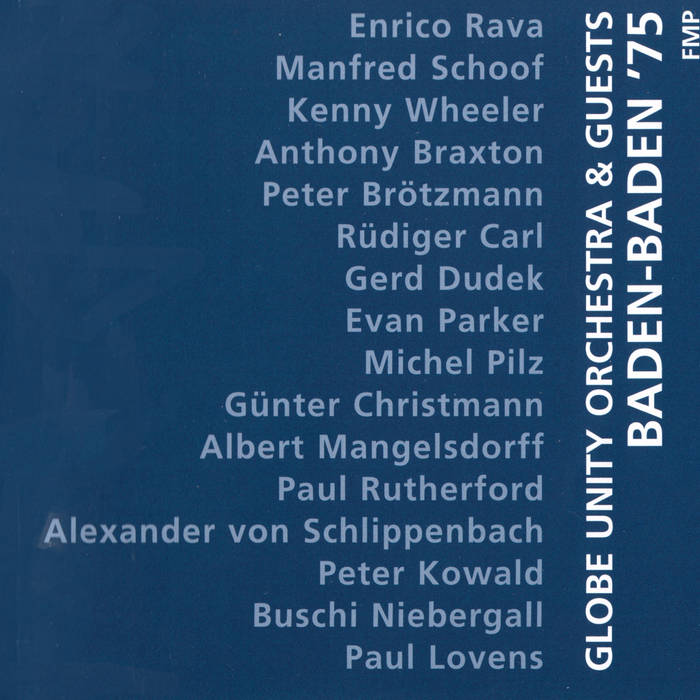 "A splendid studio session by Alexander von Schlippenbach’s large ensemble, recorded over three days of November 1975 The guest soloists are Enrico Rava and Anthony Braxton who both contribute one composition – and those two tracks are the album’s highlights. Rava’s “Marañao” is lively and noisy, with multi chaotic tuttis, while Braxton’s “U-487” uses the orchestra’s power to hammer in complex lines with uncanny joy. Also on the program are two Schlippenbach compositions and one by Peter Kowald. Excellent recording, smoking performances - why the heck hadn’t these been released earlier? Grab this one while it’s hot!"
- Monsieur Délire

"Baden-Baden '75 - Globe Unity Orchestra + Guests kicks things off in style with a quintessential example of what FMP has always been about, combining a core group of German free players with visitors like Enrico Rava, Kenny Wheeler, Anthony Braxton, and Paul Rutherford. While Globe Unity could always brew up a mighty roar, this recording shows the importance of compositional forms. Rava's "Marañao" is a free lilting swing that brings to mind Brotherhood of Breath, and Braxton's "U-487" a tour de force of ensemble colors with a proto-march theme that acts as a connective thread for features by Schlippenbach, Lovens, Wheeler, Braxton, Schoof, and Brötzmann. Kowald's "Jahrmarkt", the only previously issued piece on the CD, breaks the ensemble down in to various sub-groupings to romp through skirling, cacophonous roars shot through with deconstructed kernels of Monk, Charlie Parker and polka along with killer solos by Mangelsdorff and Braxton. And Schlippenbach's "Hanebüchen" and "The Forge" show the pianist's knack for improvisational orchestrations, whether massing the sections of the ensemble or hocketing lines around the group in swirling, spontaneous antiphony."
- ParisTransatlantic

"The opening track, composed by Enrico Rava, is a good way for listeners to ease into the FMP journey. The second track (by Braxton) is also nothing short of marvelous - with sounds both meandering and jarring before the ensemble makes it way to a wailing improvisation layered on top of an industrial, organized march. Over the course of the recording the music leans further and further out, although there are obvious but not belabored nods to Bebop, Monk, and Breuker, to name a few . The last two tracks by Schlippenbach deliver us to the threshold of the territory eventually defined by FMP."
- Cadence Magazine

Recorded by Schuster/Wagner from November 25th to 27th, 1975, during the New Jazz Meeting (Ten Years Globe Unity Orchestra) at the Südwestfunk Studios in Baden-Baden.