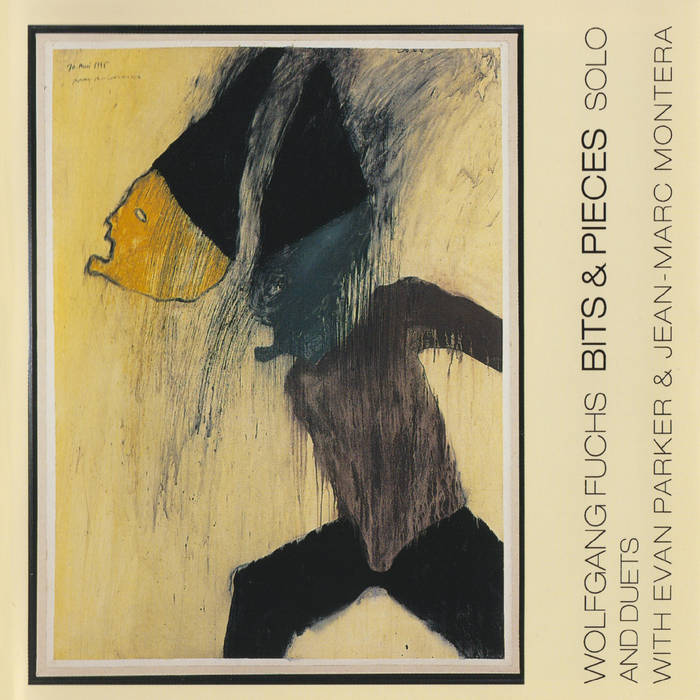 "German reeds man Wolfgang Fuchs came to improv in 1974. While his name doesn’t yet carry the iconic resonance of a Brötzmann or a Parker, Bits & Pieces, his second solo album, deserves hefty praise and will, I hope, bring a widespread boosting of his reputation. The first eight tracks are solos, beginning with the contrabass clarinet which throbs and chugs and splutters magnificently, like the recalcitrant engine of a dirty-great motorbike. On these larger clarinets Fuchs reveals his distinctive voice; on bass clarinet he also cracks open a host of remarkably expressive, vocalic utterances – monstrous, menacing, cavernous at the lower end, yet light, flinty and almost frivolous in the altissimo register. Superimposing the two extremes in multiphonics passages elicits some marvelous results."
- Rubberneck

"Wolfgang Fuchs’ Bits And Pieces is largely a solo recording, but it manages still to include a half hour of duets with Evan Parker and Jean-Marc Montera. On the solo pieces, Fuchs explores the pitch extremes of the reed family, sopranino saxophone and bass- and contra-bass clarinet. The results work the mind’s ear in unusual ways and seem to resonate with all that we can’t hear. His individual “particles” often use split tones and register contrasts, suggesting how the principle of dialogue permeates and structures much solo music. There are two fine duets with Parker that extend their previous recording from 1989, Duets: Dithyrambisch (FMP CD 19/20). Cats On A Hot Tin Roof combines Fuchs’ bass clarinet with Parker’s soprano, while Earuption a high frequency exchange between sopranino and soprano, but both pieces arise from a remarkable fraternity of thought and conception. The two pieces with guitarist Montera are also the fruits of advanced musical sympathy, set in a sonic region where Fuchs’ clarinets and Montera’s electronics breathe the same air."
- CODA Magazine

"Bits & Pieces: Solo & Duets is destined to influence the future direction of the unaccompanied format. The music's language is clear and resonant, playful-serious, and ripe with optimistic adventure. And it doesn't sound like anything else, which may baffle those who feel more comfortable with familiar company. Fuchs rolls melody upon melody, curls phrases and phrase loops in and out of each other's trajectories, rarely retreading previous trails. His in-the-moment creations arguably mimic the great cosmic boom itself. In short, it rocks. The reverberations of Fuchs' music will persist for generations to come."
- SF Weekly

"In addition to being a remarkable ensemble player (check out his work with King Übü Örchestrü), Fuchs has spent the last two decades refining an approach to solo improvisation. This generous release pairs 45 minutes of solos with a short overdubbed piece and duets with Evan Parker and guitarist Jean-Marc Montera. On the 8 “Particle” solos, Fuchs explores an astonishing range of sonic colors with his three reed instruments. “Vocal Transfer” acts as a transition to the duet pieces. The overdubbed construction layers chanted vowels, contrabass clarinet, and clarinet for a twittering collage that brings to mind the sonic experiments of Kurt Schwitters. On the duet pieces with Parker, the two revisit the territory they explored so effectively on Duets, Dithyrambisch (FMP CD 19/20). The 2 duets with Montera often sound like synthesizer or tape pieces as Fuchs pares back, intertwining burbling clarinet and bass clarinet around the guitarist’s effects-drenched slabs. Fuchs is one of today’s most significant free reed players. This release is a welcome addition to his relatively small recorded output and well worth searching out."
- Cadence Magazine

"The two improvisations with Parker — "Cat on a Hot Tin Roof" and "Earuption" — they are interesting because of Parker's responses to imposed tonalities, such as those of the bass clarinet. His "sheets of notes" style is evident almost from the beginning, but what is so captivating is his manner of shifting around his tonality to try to come at this imposed harmonic monolith from as many angles as possible, rendering it just another part of the palette. "Earuption" is a bit different in that sounds coaxed out of the horns are speaking elements here rather than musical ones. Microtonally, the two saxophones speak back and forth as a babbling brook would to the rocks it encounters on its way, or as the inner ear reacts to stimuli from the outside-in vibrations."
- All Music Guide

"After twenty years, Fuchs is still very little-known, even in improvised music circles. It’s a shame because he has developed into one of the more unique reed players in the music. If you haven’t checked him out, this is a good place to start."
- Opprobrium

Recorded by Holger Scheuermann and Jost Gebers on September 16th and 17th, 1995, in Berlin.