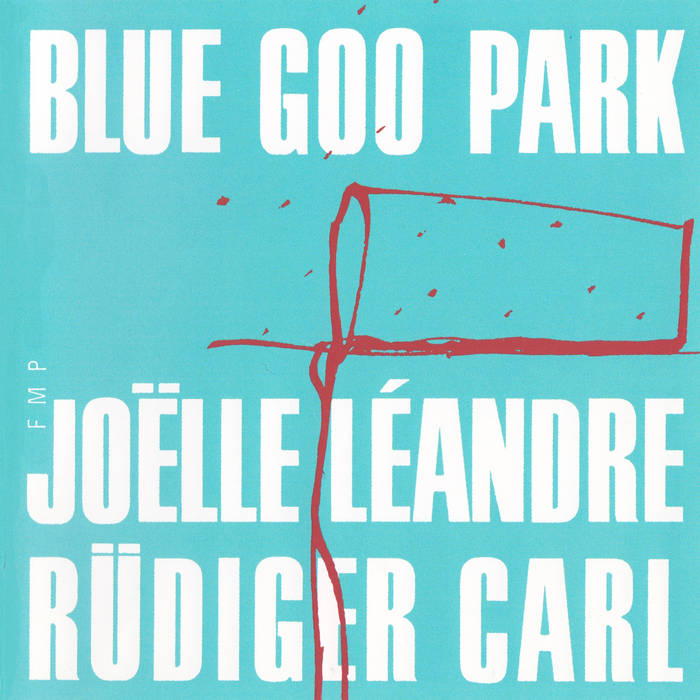 All music by Joëlle Léandre and Rüdiger Carl.

"This duet, recorded over two days in 1992, is a massive series of studies in vocal sonorities, instrumental juxtapositions, and musical collage. That such a meeting takes place at all — between one of the preeminent improvising bassists in the world and virtually the only vanguard accordionist on the other side of the Atlantic, both of whom also double as fine improvising vocalists — is something of a rare treat. As the title may suggest, Blue Goo Park is a suite of 23 small pieces, truly miniatures, that offer a playful view of both composition and improvisation. The works here — particularly "Fatty's Lullaby" and the two "oui-nons," "Tagesmusik" and "Montmartre Song" — carry within them the seeds of revolution, but it is a revolution in play, not rage. Carl's clarinet swoons and slips, blops and blips over Léandre's bowed bass or his own slowly elongated chordal chromatics. For her part, Léandre uses the bass more as a piano than as a plucked rhythm instrument, highlighting its abilities to color, shade, and texture any and all musical statements, even when they are purposely small and incomplete. It joyfully asks questions from the opening moments in an atmosphere of pure mischief, gleeful creativity, and graceful articulation."
- Thom Jurek, All Music Guide

"United by a finely wrought expressive intuitive sense, Léandre’s consummate traditional and extended technical skills, and Carl’s purposefully autodidactic stylings are equally important to this music’s vitality. Together, they create a milieu of overlapping yet separate territories where dissonant clustered blurs, evocative churning drones, near jazzy repartee, folksy sometimes waltzing songs, resounding avant interactions, and poignant lyricism are brought forth without coming too clearly into focus. Indeed, this unique park owes its existence to the meaningful convergence of divergent voices (and values). As such, it’s a model for a healthier world."
-Cadence

"These 23 brief tracks, is sometimes moodily melodramatic, sometimes lightheartedly gooey. The liner note suggests its music for a film that hasn’t been made. When Monsieur Hulot Met Freddie Kruger is one option that springs to mind."
- The Wire

Recorded by Holger Scheuermann and Jost Gebers on July 9th and 10th, 1992, in Berlin.