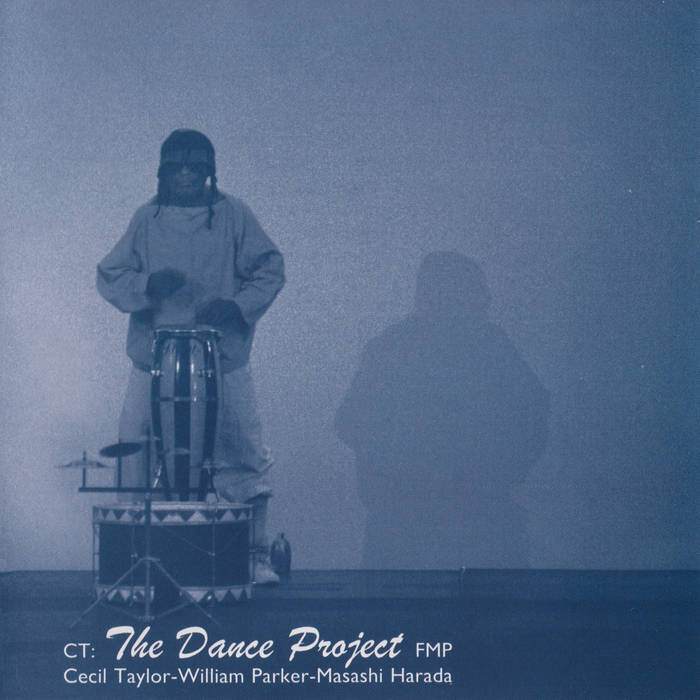 All music composed by Cecil Taylor.

"The Dance Project is a trio recording from Berlin in 1990, where Taylor was joined by William Parker on bass and Masashi Harada on percussion to accompany four dancers. Though we can’t share the visual element of the dance that inspires the improvisation here, this music stands up on its own very well. The performance opens with a chanted recitation of poetry interrupted by shouts and yells. Taylor plays quietly, with delicate fragments that evolve into clusters and crashes filled with urgency and power. Harada’s percussion is colorful and various, and sensitive to every new direction the pianist takes. But it is Parker’s remarkable presence that holds this music together. As usual his bass seems to organize and clarify the structure of the group’s music, to make it tell a story that may have sped by too quickly for comprehension in only Taylor’s hands. There has been much talk about a “mellowing” of Cecil Taylor’s music, a growing lyricism and concision to his performances now. But this recording from over 18 years ago puts the lie to that notion, as I hear his lyricism combined with curtness on this 1990 date as clearly as live performances I’ve attended in 2008. It’s not the sound of Cecil mellowing as much as my ears growing."
- Cadence Magazine

"The soundworld is sparer than much of Taylor’s work of the period. In fact, the closest comparisons might include his pianoless albums made for Leo in the late ‘80s. As with those recordings, even the densest moments on Dance Project are somehow replete with space. Masashi Harada’s playing accounts for much of the novel aesthetic, his touch light and his interjections fewer than those of other drummers in Taylor’s orbit. Harada’s approach to sound is beautifully aphoristic, a well-placed roll or cymbal stroke speaking volumes in his hands. Bassist William Parker and Taylor’s symbiotic relationship is beautifully captured here, as demonstrated by the opening moments of the album’s second large piece, “Soul Activities”. Parker’s harmonics complement Taylor’s multihued pianism, the two creating a multileveled counterpoint as they do throughout the disc. Truly though, Taylor’s approach brings the most surprise and enjoyment. While the percussive nature of his work gets the most attention, he commands every detail of each note he plays. His virtuosity here is attendant to his sense of detail, as he executes gorgeous tremolos and exquisite glissandi, the angular arpeggiations more meaningful as a result of the seemingly limitless timbral variety with which they are contextualized. The recording is first-rate, each detail captured with stunning clarity. It presents a more introspective side of his art, an aspect discussed too infrequently."
- All About Jazz

"Cecil Taylor's involvement in the dance world might be little known to most fans of the prominent pianist. Yet Taylor honed some of his talents by accompanying ballet rehearsals at a young age, and has continued the practice through his work with such dance luminaries as Dianne McIntyre and Mikhail Baryshnikov. The disc contains two distinguished works, each of which is broken into two parts. The whole of the album is marked by a distinct sense of restraint, highlighting interaction and careful mood setting. The result, as evidenced by the closing "Willing," is an angular work whose flow is marked as much by the spaces between the musicians and their individual sound worlds as by the tautness of the unit's delivery. It is a compelling and creative work that bubbles with spontaneity as the musicians sonically move among themselves and their dancing counterparts."
- Henry Smith, All About Jazz

"Duos and solos are integral parts of the overall performance as opposed to opportunities for self-indulgence, and the underlying group expression is in itself purged of excess. Truly the trio thinks as one, making the most of the moment even while it appears to have a collective eye on the overarching dynamic of the music."
- Nic Jones, All About Jazz

"Far from a basic Taylor library item, The Dance Project nevertheless has sufficient quirks and anomalies to engage his veteran listeners."
- Point of Departure

"As pointless as underlining the merits and the careers of the involved parties might appear, the exceptional meshing of technical adroitness and physical boldness that this performance offers is something to literally contemplate and remain astonished at."
- Temporary Fault,

Recorded live during the Summer Music concert series by Manfred Hoffmann & Jost Gebers on July 8th,1990, at the Akademie der Künste in Berlin.