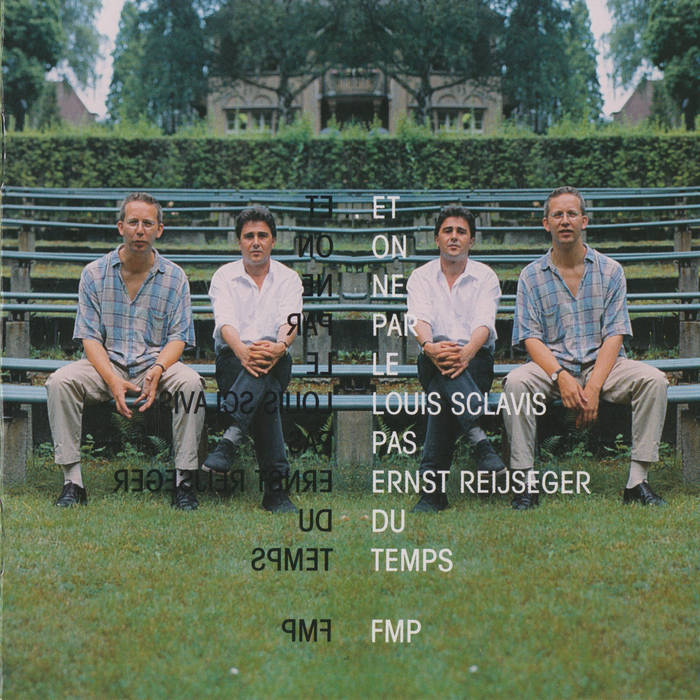 Composed by Louis Sclavis & Ernst Reijseger, except "Louis" (by Sclavis) and "Ernst" (by Reijseger).

"This duet performance by clarinetist Louis Sclavis and cellist Ernst Reijseger is one of a series of rare meetings the two have played over nearly two decades. Sclavis is hailed the world over for his mastery of all of the clarinet family's instruments, and plays a number of them here, as well as soprano saxophone. Reijseger, best known as a member of the Trio Clusone, is a wizard as a cellist. This date in 1993 lasted an hour, and for those 60 minutes in Berlin they produced a set of improvised music that is so thoroughly mystifying in the quality of its empathy and telepathy, one would swear it was rehearsed. No cue goes unanswered over 11 "tunes" that last anywhere from four to eight minutes. Each idea introduced is built upon, then added to and then transposed onto another. As Reijseger plucks, strums, bows, scrapes, and beats his cello to entwine with Sclavis, the latter takes melodic invention apart from inside, making improvisation part and parcel an extension of folk song. And yes, these interactions do sing — so much so they make one laugh and cry. This is a concert in the truest sense of the word, and an example of the true qualities of improvised music: That two men can come together and extend each other's capabilities as musicians. Awesome."
- Thom Jurek, All Music Guide

"A dialogue of exceptional beauty and sensitivity. “Et” and “Pas” have an elegant, “classical” chamber feel, “Le” is jazz-tingend, with Reijseger strumming the cello with the lightness of an acoustic guitar, “Louis” is a gorgeous bass clarinet solo, spiraling with upturned phrases; and “Ernst” is a terse and scrambled parody of a Bach cello suite. The fluency of these improvisations is breathtaking."
- The Wire

"The CD by Sclavis and Reijseger is an excellent example of neo-classical improvised chamber music, often resembling the high modern styles of Bartok, Schönberg and Stravinsky. What makes this music vital is that it’s made in real time, and it’s enlivened by what might be called folk materials from the American idioms. Among his many techniques, Reijseger plays fine thrash cello. If on one track, with bass clarinet soaring and cello playing a wobbling version of a walking bass, Sclavis and Reijseger recall Dolphy and Richard Davis in 1963, well Dolphy and Davis were closer to modern classical music than any other improvisers had gotten at the time."
- CODA Magazine

Recorded live by Jost Gebers on July 30th and 31st, 1994, during the Summer Music concert series at the Haus am Waldsee in Berlin.