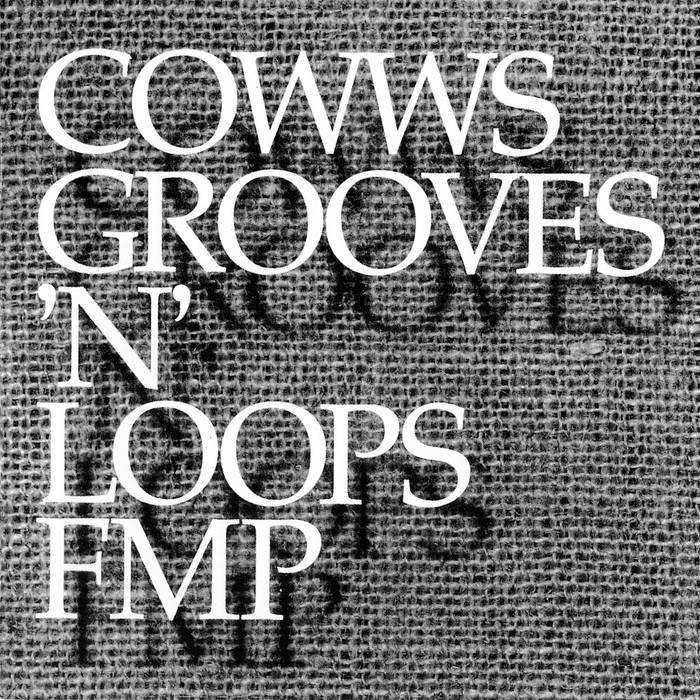 All compositions by Rüdiger Carl

"COWWS is/are, to deconstruct the acronym, Rüdiger Carl, Jay Oliver, Phil Wachsmann, Stephan Wittwer, and Irène Schweizer. As the title might suggest, they stir in riffs and rhythms from a multiplicity of genres, from café accordion Muzak to free Improv fragmentation. These element might be presented deadpan (cop the Han Bennink-cum-Ventures guitar on “Relative Ewiges Lied”), knowingly, or as open subversion. Sometimes, through, as on Wittwer’s guitar tour through the worlds of James Brown, Jimi Hendrix and Massaker at the start of “Blue Goo”, we may be hearing a case of just-plain-enjoyment. Cowws is Naked City for those of use who do get the joke/spot the reference as quick as the next hepcat, but quite likes to savor it for more than 20 seconds. Despite the proximity of ingredients as varied as a delicate clarinet/bass duet to guitar power chord overload to Viennese severity, Grooves ‘N’ Loops hangs together to produce a consistently stimulating and pleasurable listen."
- The Wire

"This session is comprised of 16 pieces, most in the five minute range, that freely draw upon skewed popular music rhythms from funk to tango, carefully arranged counterpoint, and collective improvisation. What is immediately striking here is the instrumentation. Carl’s accordion can sound like anything from a traditional squeezebox to a wheezing organ to a reedy harmonica; his clarinet playing concentrating on the warm, woody, lower registers. Wittwer brings a rock edge, hinting at jangling noise-rock, surf-guitar rave-ups, and free improv clusters. Wachsmann’s violin jumps from swoops to scratches to broad swaths of electronic sheets. Schweizer often hangs back, dropping square clusters in the cracks and crevices of the ensemble. These pieces turn conventions on their ear. “P. Waltz” is a fractured dance with clarinet, violin, and jagged guitar drunkenly staggering over Schweizer’s piano. “Hinter den Gardinen” is a funky strut with Oliver quietly laying down a groove for Carl’s skittering single-note accordion runs, and Wachsmann’s singing violin. “Blue Goo” is a stunning duet for violin and bass that moves from atmospheric free improvisation to a somber melody as Wachsmann’s plaintive wail sails over Oliver’s droning bass. On the spry stomp, “Tati’s Tatoos”, Wachsmann tosses out sawed and distorted violin against Wittwer’s grungy, fuzz-tones. ‘Erste Hilfe’ sounds at times like a French country dance reflected in a shattered fun-house mirror, with Carl’s driving accordion bouncing off of Schweizer’s percussive clusters. “Bei Fuss” is a collectively improvised polka with guitar, accordion, and violin looping in and out of Oliver’s driving bass and Schweizer’s stuttering snare playing. Loops and Grooves is an original and bracing release, offering a fresh, inventive blend of composition and free improvisation. Both writing and playing is first-rate throughout. Anyone who thinks improvisation has reached a dead end or has lost its relevance had better check this out."
- Cadence

"In 1993, free music adventurer Rüdiger Carl and his longstanding good-time band of crazy geniuses the COWWS (Irène Schweizer, piano and percussion; Phil Wachsmann, violin, viola, and electronics; Stephan Wittwer, electric guitar; and Jay Oliver, bass) took upon themselves the concept of celebrating the 25th anniversary of the year 1968 by musically derailing everything that happened since that year. Carl conceived of Grooves 'N' Loops as one composition with 16 sections or "movements." Referents to all musical trends, world styles, and genres are retrofitted into the COWWS' way of working through things. Therefore, where a rock & roll chord progression such as "Louie, Louie" (or a riff by P-Funk) would be played by Wittwer, it would not actually be a literal reading or representation but, as it was juxtaposed against a Viennese waltz played by Carl or Schweizer, it would become a trace, a memory, an imprint laid upon a music currently being improvised out of the detritus if the past combined with the energy, innovation, and humor of the present. As music, it works. The flow of these moments, continually recontextualized and recombined, becomes — in the improvisation of each moment — the roots of a new language in and of itself that becomes just another memory in, say, 25 minutes or so. On and on it goes, deconstructing how much, nobody knows. But it is a gas to listen to. Play it again."
- All Music Guide

"I haven't heard an agreeable, gently persuasive improv album quite like this one all year. 'Die Einführung' is the first of the grooves, set up by Carl's clarinet and Schweizer's piano, and then quickened by Oliver's warm-hearted double bass - a mischievous, jaunty figure that reappears with a different instrumentalist's embellishments each time it nearly gets squashed. Guitarist Wittwer sounds like he's about to lay down one of those twangy soundtracks to a Sergio Leone western, but 'Relativ Ewiges Lied' soon starts to lilt in a Caribbean way towards ska as Carl fans out the melody on accordion. You're just waiting for somebody to sing 'A Message To You Rudy' when the recording's editor steps in prematurely to order a sudden fade. 'Gunst I' offers a solo Wittwer the chance to demonstrate why he's at the forefront of improv's European, eclectic electric guitarists; here he bends, batters, wah-wahs and rips a rock riff to pieces. The string duet, 'Blue Goo', by Wachsmann and Oliver is another well-focused piece to savor, concluding with the viola's despairing tone accompanied by a shuffling, smudgy-textured bass ostinato. Jay Oliver died in Berlin in the late summer of 1993, several months after these pieces were recorded: they now stand as a fitting memorial to his talent, and to the generous spirit of adventure that pervades this rewarding album."
- Rubberneck

Recorded live by Ansgar Ballhorn on January 12th and 13th, 1993, during a WDR Jazzmeeting at the Ottenbrucher Bahnhof in Wuppertal.

Produced and recorded by the Westgerman Radio/WDR Köln.
Mastered by Jonas Bergler.
Produced by Jost Gebers.