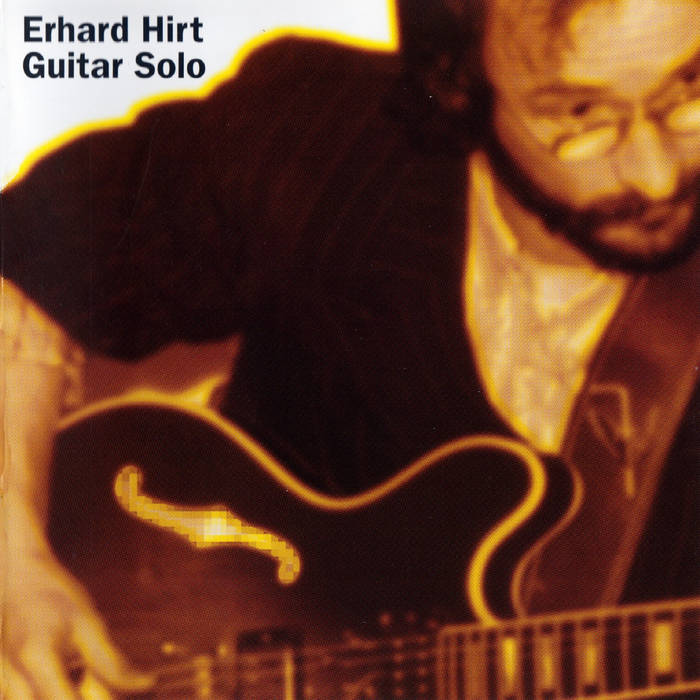 All compositions by Erhard Hirt.

"This collection of 18 short improvisations for solo electric guitar and guitar synthesizer provides an ideal introduction to Hirt's unusual sound world. The appropriately titled 'Drone' sets up a static bass drone which is then embellished by a mesh of guitar synthesizer lines. The strangely beautiful, chiming quality of 'Slow Music' with its unpredictable pitch wavering and distortion is reminiscent of Hans Reichel's work; 'Klapp & Flap' uses synthesized percussive effects, and 'Flute' counterpoints flute sounds with sharply plucked strings. Concise and always bursting with unclassifiable inventiveness."
- Rubberneck

"Fans of Fred Frith's guitar-on-the-table approach, or Jim O’Rourke's most woolly playing, will take an instant liking to Erhard Hirt's unique, apoplectic style of improvisation. From the opening tape and string slippage of "Good Times, Bad Times" to the breakneck freakout bending and mauling of "Drive," Hirt has devoted himself to being an improviser first and a musician second — and no, that's not a negative comment. Hirt's stylistic variances are enormous, and his detuned approach to the fretboard allows more than a few microtonal possibilities to emerge from the maelstrom. There's a percussive edge to even the most limpid of pieces (such as "Auge und Ohr"), and his knowledge of how to create the appearance of ghostly arpeggios — when in fact there are only multiple vibrating strings — works to extreme measure on "Klapp and Flap."
- All Music Guide

"It would be easy to talk about Erhard Hirt’s playing in poetical terms – descriptions of celestial bells, tidal sustains transforming into bone-jarring snippets of “pure sound." Easier anyway than trying to describe this hour-long collection of guitar alchemy in terms of other guitarists or influences, which are both apparent and invisible. To be sure, I could say that the clarity and complexity of these pieces is remarkable: few processing-electric guitarists have achieved this kind of tonal variety in such compact form. I could speculate that, in the areas he works; only Henry Kaiser, Dennis Maxfield and Jim O’Rourke are at his level in the techno-improvising guitar world. More importantly is a certain unseeable quality that I enjoy very much on Gute und schlechteZeiten, (Good and bad times); the feeling that Hirt plays primarily with his brain. Internal logic of processing equipment and the internal-externalized logic of the musician working closely to create an illusion that he has bypassed the “hands-on-strings” guitar playing for a more cerebral method: mind-direct-to-disc. Ultimately it doesn’t matter if you read that Hirt’s guitar sound like a pipe organ dumped on its digital ear. As Duke Ellington said, “If it sounds good, it is good”, and this CD sound very good."
- The Improviser

All music heard as played except track 5, which is two pieces cut together.