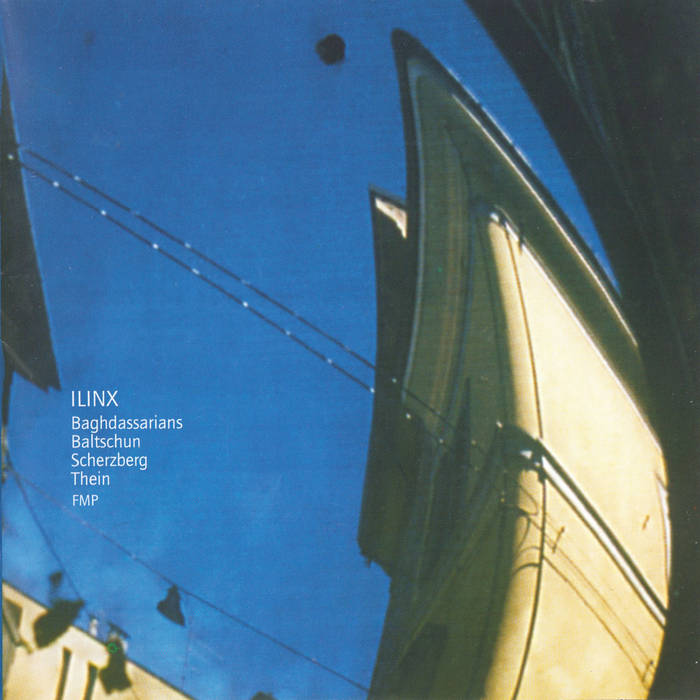 "At a time when the masses are dropping their first-choice instruments and trading them for laptops, the German quartet Ilinx is treading that same path, but only mid-way. Two of its members - guitarist Serge Baghdassarians and sample-magician Boris Baltschun - are converted over to the electronics medium, while alto saxophonist Lars Scherzberg and percussionist Jacob Thein are playing their first chosen instruments. The music is played with a particular edge and wild abandon. Scherzberg is especially keen on dispersing a wad of delicately subdued breaths, while Thein delivers substantial amounts of trickling percussion in the vein of Tony Oxley. Electronics aspect is obviously heavy. Heaps of scrapes, hums and ticks escape from Baltschun's sampler. Meanwhile, Baghdassarians wraps up the sound in a concoction of warped metallic metaphors and luxuriously scraping bleeps. Here's hoping Ilinx will have further documents of this sort pop up in the future.
- Gaz-Eta

"From the very start, this is rambunctious post-industrial free improv in the early ’00s Grob vein. Think Konk Pack for sure, or some similarly aggressive amalgam of electronics and European free music. Lars Scherzberg slices and dices through the field of perky electronics his session mates Serge Baghdassarians and Boris Baltschun frequently plow, framed by the rolling, Lovens-ish percussion of Jacob Thein."
- Dusted Magazine

"Ilinx" was recorded both in live and studio settings. The instrumentation comprises electric guitar, sampler, alto sax, drums, percussion and electronics. This is one of the finest examples of EAI (electronic acoustic improvisation), a perfect amalgamation of original sources and modifications which sound like computer music at times, but with an acoustic feel that can almost be smelled. Maneuvering their evident technical abilities in ways that range from the polite to the borderline, the musicians generate the disbandment of collective common sense while keeping in touch with a solid logic, driving the music across the most impervious unpredictability. Satisfactory expressiveness from any conceivable angle in an important "reference point" release."
- Touching Extremes