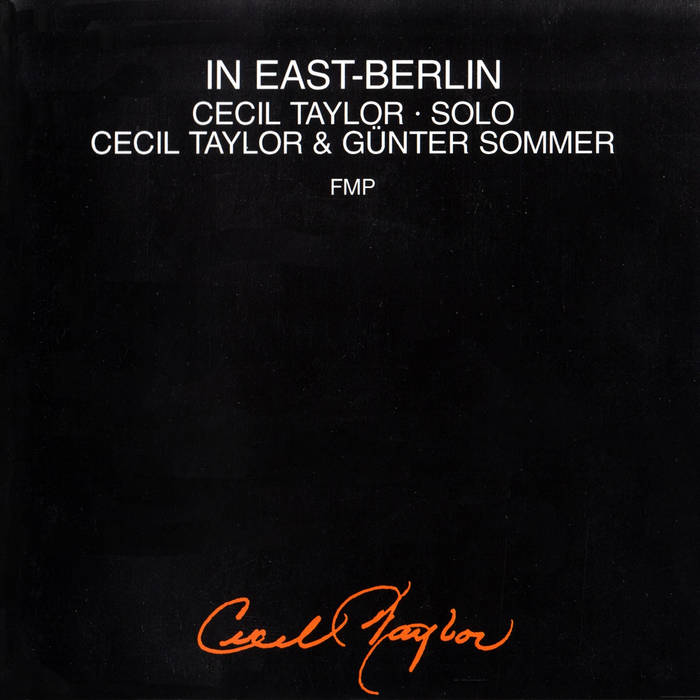 "Recorded before the historic opening of the Berlin wall, Taylor heralded musically the strains of freedom in this stirring, and generally magnificent, performance. Indeed, while there is barely a recording in existence with a greater freedom, experimentation and independence, it is hard to find a more appreciative audience than the East Germans who attended this concert. The first disc, exclusively solo piano, is a study in dynamics. Taylor creates giant, jagged shards of sound, pauses, and runs on again, traversing the keys at the speed of light, playing lines a drummer would be hard pressed to match, yet continually sounding melodic. But it is the second disc, the duets with drummer Günter Sommer that are awe-inspiring. Sommer first sets up a simple repetitive beat that is the lattice-work for Taylor’s adventures. Than Sommer shifts to cymbals, and the tintinnabulations echo the piano’s beauty. Sommer and Taylor briefly enter a balletic interlude and then resume their symbiotic propulsion, the drummer framing and establishing the piano’s lyricism. Taylor’s performance is titanic, leaving the serious listener spent and fulfilled."
- The Philadelphia Tribune

"Inherent in this double-disc document from FMP's aural documentation of Cecil Taylor's month long residency in Berlin during the summer of 1988 are two very different concerts. The first disc features Taylor playing at the beginning of his residency in June, performing solo. The dynamics and hammering runs of enormous chord clusters and constructively built pyramids of middle-range and lower-register notes cascade from his hands in bursts in the opening section of the lengthy "Reinforced Concrete." This mammoth work allows all the wonderful elements of Taylor's sound architecture to be on display simultaneously. On disc two, recorded the next evening, Taylor is in duet with the great lyrical drummer Günter Sommer. Sommer has a true command of glissando, not only in his captivating and astonishing cymbal work. Taylor's interaction with him is one that is completely complementary. Taylor has been in dynamic, overpowering duos of force before but what takes place here, perhaps because of its great energy, is something totally different. It's full of the wonder of delight and discovery. It charges and slashes and burns to be sure, but more than all this, it feels like two musicians dancing. And it is a dance of such intricacy, finesse, and literate flame-spitting energy that one cannot help but smile — if not outright guffaw — at the sheer artistry in it all. Highly recommended."
- Thom Jurek, All Music Guide

"A 1988 concert featuring everything anybody has ever known and loved – or at least felt – from the man. Extended hammering runs, committing battery on the instrument, or just plain ethereal CT beauty, is all here. The first disc is unaccompanied and drummer Günter Sommer joins in for the second concert. It’s a sensitive pairing, even if that adjective may not seem quite right at first."
- Coda Magazine

Recorded live by Kurt Agt/Radio DDR during Jazz in der Kammer No. 155 on June 20th and 21st, 1988, at Deutsches Theater (Kammerspiele) in Berlin/DDR.