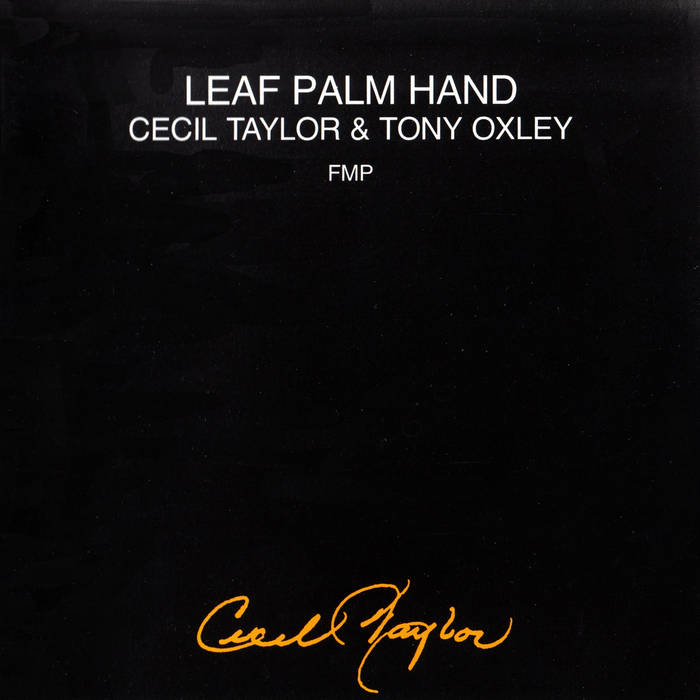 DISC SIX of THE COMPLETE CECIL TAYLOR IN BERLIN '88
ONLY AVAILABLE as part of the Box Set
VISIT THIS PAGE for details of the entire set and to PURCHASE: destination-out.bandcamp.com/album/the-complete-in-berlin-88-box-set

"This duet between pianist Cecil Taylor and drummer Tony Oxley is a study in contrasts. Musically, there is a similarity of approach between the two: Both are physical players with an ear for dark dramatics. Percussively, each attacks his instrument in the same way, palms down, forcing off the fingertips and into the instrument, whether drums or piano. Improvisationally, they differ greatly in that Taylor — so used to being a soloist — is proactive while Oxley is reactive; here, they attempt to bring both those roles into sync. Oxley moves his own attack up a notch, employing more elementals than just his kit, trying to "sing" the drums. Taylor looks deeply toward a romantic sensibility he seldom shows, creating harmonic fixtures from accents and triples, while simultaneously constructing lyric melodies for Oxley to play from. And he does, weaving absolutely thrilling cymbal and bell lines through Taylor's arpeggios, turning his rhythms inside out to create the appearance of a harmonic register that engages all of the different figures Taylor is firing off like lit matches. There's no letup for the entire set; it's one dazzling display after another. It leaves the listener dazed and awed by such a soulful yet pyrotechnic display. This is one of Cecil Taylor's most "melodic" improvisations ever."
-Thom Jurek, All Music Guide

"Leaf Palm Hand" saw a logical progression in Taylor's choice for his dream percussionist. Staying within the realms of Europe, Oxley fits the mould perfectly. As the two feel each other out, Taylor proposes a few key strokes at a time, while Oxley responds with cymbal heavy crashes. Taylor's dance-like tickles on the ivories turn into full blown gale-force attack early on. Throughout the course of two lengthy numbers, the duo establish a rapport. The give-and-take coherence these two launch is stated on a nearly telepathic level. A couple of brief piano pieces at the tail end of the record encapsulate the atmosphere. Nothing is left to chance and the two make it sound as if that particular night in Berlin twenty years ago they had a blast. Taylor would go on to bring Oxley into his Feel Trio, which had its beginnings shortly after the proceedings in Berlin wrapped up. Only special relationships are born out of coherent musicianship and perfectly matched skills. Flawless!"
- Gaz-Eta # 68

"One of the most powerful Cecil Taylor albums for FMP - a great set of duets with drummer Tony Oxley, and one that really brought Oxley's talents to the attention of a whole new generation! Cecil's piano is boldly expressive throughout, but always has its own sense of core - that Taylor-like magic that really seemed to click into place during the 80s, with almost its own intrinsic sense of rhythm and logic. Oxley turns out to be a great partner for that sort of sound - opening up his drums with almost melodic like qualities - hitting the kit with the same sort of free energy that Taylor brings to the keyboard of the piano - really setting fire at points, but making things soft and contemplative at others." - Dusty Groove

Recorded live by Eberhard Bingel & Jost Gebers during IMPROVISED MUSIC II/88 on July 17th, 1988, at the Kongresshalle in Berlin.