IN BERLIN '88: REMEMBRANCE - info only 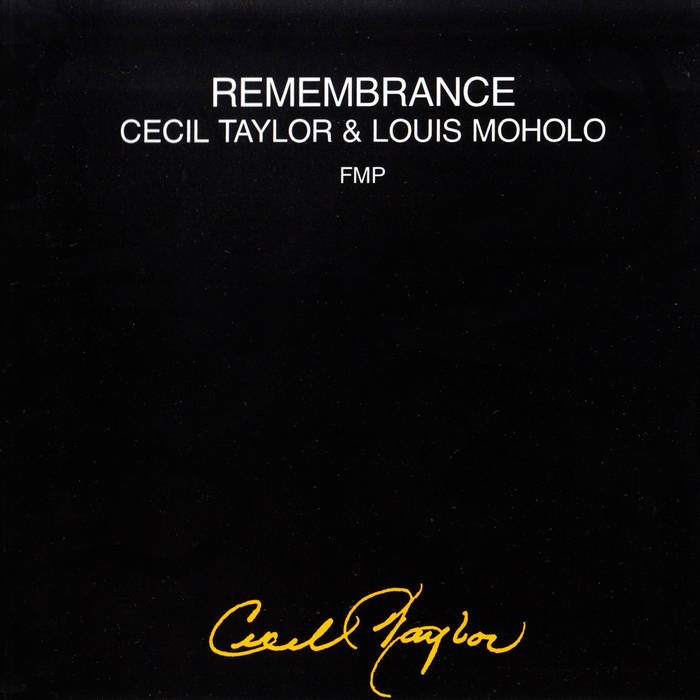 DISC FOUR of THE COMPLETE CECIL TAYLOR IN BERLIN '88
ONLY AVAILABLE as part of the Box Set
VISIT THIS PAGE for details of the entire set
and to PURCHASE: destination-out.bandcamp.com/album/the-complete-in-berlin-88-box-set

"Much of the music Cecil Taylor made during his month-long stay in Berlin was truly worthwhile and reinvigorating for him as an artist, some was so brilliant it ranked near the pinnacle of his long and well-documented career. This date with South African drummer Louis Moholo is one such performance. The aggressive approaches used by both men to intricately weave patterns and tapestries of sound in order to turn it back on itself forms a common bond, and here are exploited to the maximum effect. This duet cannot be characterized in terms of pure dynamic force, however, as Taylor has rarely sounded so musical as he does here, with his deft use of arpeggio versus chromatic form, his overhand approach to both register and counterpoint, and his elongated legato phrasing. And Moholo is not merely an accompanist. He understands that rhythm is not only pulse — it is song as well. Hence, on the two duets here, Moholo moves Taylor to concentrate on the "singing" aspect of his pianism, using slippery brushstrokes against the rims, careening rim shots with a pair of sticks, and flummoxing stretches of the bass drum that shimmer and shake Taylor's skittering skeins of angular rhythmic notes with stunning precision. There are few recordings like this one, which inspires even as it amazes the listener."
-Thom Jurek, All Music Guide

"Much has been made of Moholo's South African origins in describing this pairing, but don't get the wrong idea -- Moholo uses a conventional drum kit, relying mostly on straight-ahead snare and cymbals throughout this date. Often his accompaniment consists of relatively quiet, though complex and multi-layered, snare-cymbal rhythms. They both pause for air from time to time, and Moholo even gets out the brushes during some of these periods. But much of the date has Cecil hammering away furiously with Moholo's propulsive snare-cymbal shots and breakers, and on the 20-minute track 2, "The Great Bear," things get pretty heated. There's a single minute-long encore, "Stone" that has Cecil playing some slow phrases and Moholo softly hitting a tom-tom so that it almost sounds like he's plucking on a bass string."
- Joe Pierre

Recorded live by Eberhard Bingel & Jost Gebers during IMPROVISED MUSIC II/88 on July 3rd, 1988, at the Kongresshalle in Berlin.