IN BERLIN '88: SPOTS, CIRCLES, AND FANTASY - info only 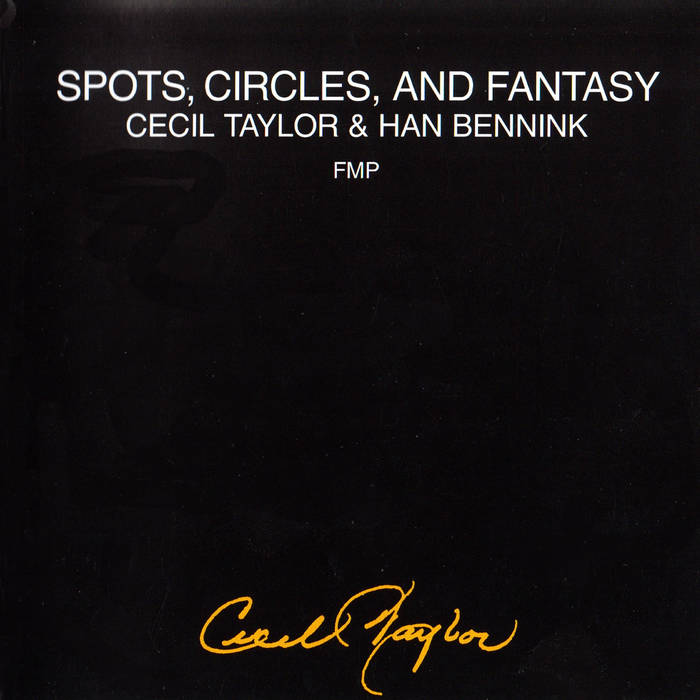 DISC FIVE of THE COMPLETE CECIL TAYLOR IN BERLIN '88
ONLY AVAILABLE as part of the Box Set
VISIT THIS PAGE for details of the entire set
and to PURCHASE: destination-out.bandcamp.com/album/the-complete-in-berlin-88-box-set

"Here we go: two of the most unruly cats ever to sit behind anything, let alone a piano and a set of drums. This is a mammoth duet. Things begin with Bennink at a furious tempo, making sounds on everything on the kit but the skins themselves. Taylor enters in earnest with a shout and a few chords in the lower register and then the two are off to the races, colliding and swimming with and against each other. Bennink uses alternate means to control the dynamic and Taylor just starts ripping at the strings of the piano until he finds his own groove and sidles in next to Bennink for a silvery conjuring match of accented tonal scales, swept brushwork over clamoring tom toms, and a whole lot of good-natured humor for measure. This is a solid duet and an exciting one." - All Music Guide: 4 Stars

"This is one of many great duets pairing Cecil with a drummer, during his extended residence in Berlin in 1988. In this case, the drummer is Han Bennink, and while this concert seems to garner less praise than the dates with Tony Oxley or Louis Moholo, I don't know why -- it's really a fantastic set. Cecil stays in the forefront, while Bennink offers up snare, tom-tom, and cymbal rhythms underneath. The playing does get reigned-in in spots, with Cecil resting at times with sparse phrases, so it's not all break-neck, but Cecil definitely maintains the energy of any of his best solo work throughout this 74-minute concert." - Joe Pierre

Recorded live by Eberhard Bingel & Jost Gebers during IMPROVISED MUSIC II/88 on July 10th, 1988, at the Kongresshalle in Berlin.