by Cecil Taylor with Tristan Honsinger and Evan Parker 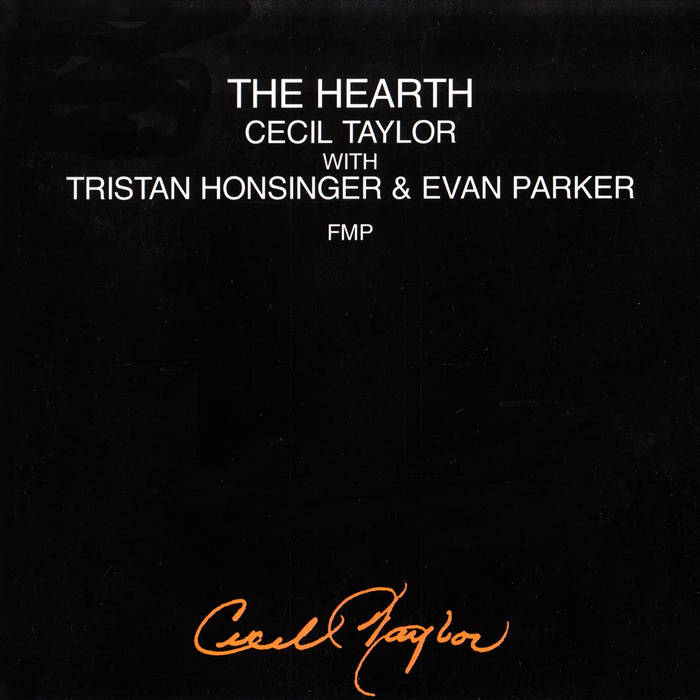 "THE HEARTH"
Cecil Taylor with Tristan Honsinger and Evan Parker

DISC NINE of THE COMPLETE CECIL TAYLOR IN BERLIN '88
ONLY AVAILABLE as part of the Box Set
VISIT THIS PAGE for details of the entire set and to PURCHASE:
destination-out.bandcamp.com/album/the-complete-in-berlin-88-box-set

"This trio, which consists of Taylor, saxophonist Evan Parker, and cellist Tristan Honsinger, is an improviser's dream. Here are two personalities strong enough to rein Taylor in and bring the music up out of him instead of the force. Parker chose tenor for this gig, and he and Honsinger play to each other for the first couple of minutes, establishing a mutated kind of blues groove. Honsinger's bowed chord voicings offer Parker plenty to work off of tonally. Taylor enters with arpeggios blazing, but he is reined in by the architecture created by Honsinger in his phrasing. When Taylor is forced to play inside it, his creativity rages; he is full of colors, glissandi, dynamics, and a palette of textures that is dizzying — so much so that Parker stops playing for a while. When he reenters, it is to slow things down and build upon some of the tonal structures Taylor has been tossing off within Honsinger's phraseology. Parker becomes a mode setter, creating a new layer of intervallic order from each set of overtones, where any player is allowed to push against its walls but not to break them. And from here, a language is established within the trio, making the musicians move into one another more closely, taking bits and pieces and growing ideas out into entire musical universes made by three. This is a devastatingly fine gig, and one of the best Taylor played the entire month he was in Berlin."
-Thom Jurek, All Music Guide

"This fascinating date is instantly distinguishable from anything else in the Cecil Taylor discography, and one in which Cecil emphasizes a softer touch, making the date as a whole seem a bit more melodic and harmonious than some of his other outings. As such, "The Hearth" is certainly worth adding to your collection."
- Joe Pierre

Recorded live by Eberhard Bingel & Jost Gebers during IMPROVISED MUSIC II/88 on June 30th, 1988, at the Kongresshalle in Berlin.