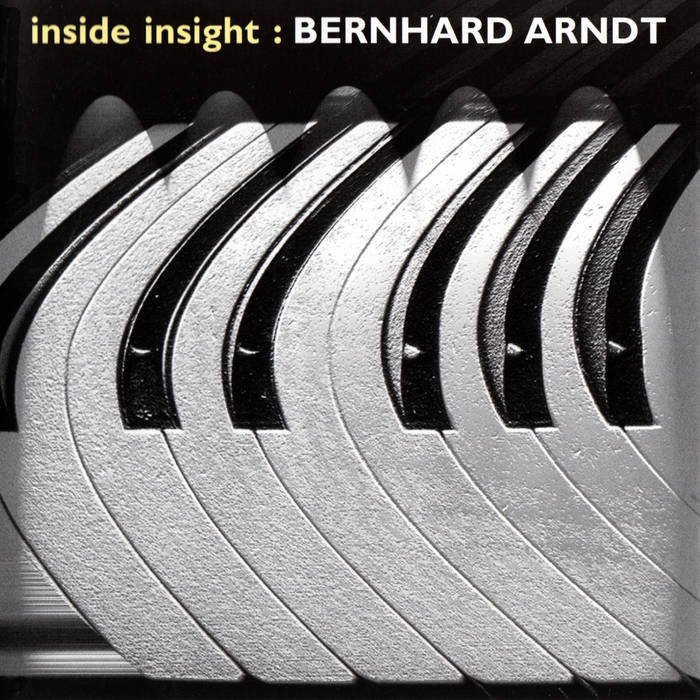 All compositions by Bernhard Arndt.

"Bernhard Arndt is a stunning pianist of depth, vision, and striking originality. Coming from a background that includes Bud Powell, John Cage, Herbie Nichols, La Monte Young, and Cecil Taylor, his approach is rooted in a technical virtuosity that is staggering on both the inside and outside of the piano's body. Utilizing electronic digital delays to create microtonal palettes from his skittering skeins of note clusters and chorded tapestries, Arndt is able to showcase truly what Monk meant when he said he played the notes between the keys. When listened to either loudly or with headphones, these tiny micro harmonics become clearly evident and engulf the listener in a swirl of musical and tonal language previously unrealized. The 11 studies here are liable to wrap the listener in a cocoon of musical ambiguity, as the piano ceases sounding like itself and becomes more a key to the universe of overtone and chromatic architecture. To call what Arndt does anything other than sonic investigation would be a disservice to him and his work. Suffice to say that Arndt's recordings are pure music realized through an impure approach to creating and manipulating sound. Inside Insight is truly a visionary work."
- All Music Guide

"Bernhard Arndt's piano improvisations combine conventional keyboard playing, prepared piano, interior play and live electronics in unusual, even stunning, ways. Arndt's work grows out of the century's piano and/or keyboard exploration, and it includes elements of Henry Cowells' early work using piano strings, the glass on string glissandi of Harry Partch, John Cage's keyboard work from the early sonatas for prepared piano to the electric harpsichords of "HPSCHD", Karlheinz Stockhausen's electronic manipulation of pianos in "Mantra", and Terry Riley's use of tape delay in his electronic organ improvisations. Arndt has managed to pull all those techniques into the act of performance. Arndt is both an engineer of remarkable sonic shifts and an architect of well developed pieces, but more than that, he's something of a magician. These pieces often seamlessly combine the capacity of the piano strings for altered timbres and changing pitch with a variety of electronic techniques for repetition, magnification and change. The results can be as beautiful as they are mysterious, a sound world that exists between the instrument's interior and exterior and the acoustic and the electronic. There is interest and surprise on every track. Highly recommended."
- Cadence Magazine

"Bernhard Arndt is a Berlin-based pianist, known there as a composer and improviser, having played with John Tchicai, Cecil Taylor and Butch Morris, whose Berlin Skyscraper is his sole other discographical credit. Inside Insight is an impressive and wide-ranging solo debut, in which Arndt demonstrates both formidable free chops and an acutely attuned ear for sound. The opening and closing tracks purvey rapidly articulated blurs of finger-to-keyboard improv action, but in between them Arndt focuses his attention on his piano’s innards, embarking on a thorough exploration of its strings over nine diverse and entertaining tracks. Arndt displays sharp attention to the details of sounds, hitting the strings to establish varying patterns of percussive sounds whose volume swells and fades, and whose rhythm pulses and subsides. Inside Insight reaches its peak with ‘Metropolitan’, in which cycles of delicate rattling sounds separated by periods of very quiet scraping gradually grow into thunderstorms of menacing percussion, an exercise in exquisitely controlled sound manipulation which aesthetically sits a very long way from any idea of free jazz or improv. This is an outstanding debut."
- Opprobrium

Excerpt from "Seven ways of looking at a frog" from "Cornerless People" by John Hartley Williams, Bloodaxe Books Ltd., Newcastle upon Tyne.

THANKS to Jonas Bergler, Udo Arndt, Stan Regal & Audio Studios. B. A.