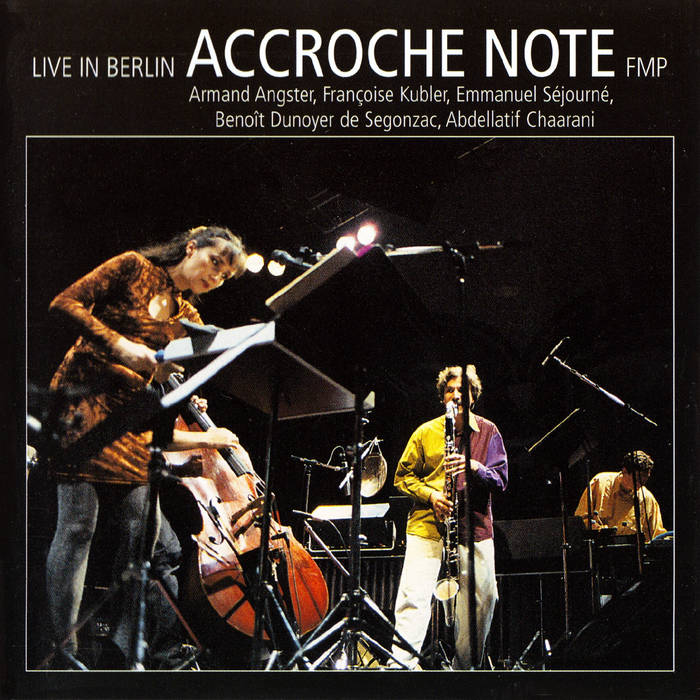 "Accroche Note are five musicians who bring the liberating openness of improvised music to every piece they play, including compositions by Cage and Stockhausen. The language of Eric Dolphy’s sublime Out To Lunch would appear to be one important point of departure, as Armand Angster’s bass clarinet gutturally rasps and croaks against the clamorous, reverberant vibes of Emmanuel Séjourné. Equally absorbing is the vocal technique of Francoise Kubler, whose voice, like the group as a whole, displays a rich flexibility. Their music locates the essential reciprocity that flows between two types of music and leaves no trace of a seam. Their version of Stockhausen’s “Tierkreis” is reformed and transformed, while ‘Pico’ refloats and relocates Dolphy’s sound world. It all works and is utterly natural."
- Rubberneck

"It sensuously and effortlessly moves through Cage and Stockhausen with a pinch of folklore and no fear of melody. Kubler’s stunning and sensual voice is often featured alongside Angster’s floating clarinet. The beautiful 10-minute “Kalitzka” begins with Kubler’s voice singing a folkish melody. Then a melancholy clarinet solo ruminates, echoed by Kubler, who slowly moves again to the fore. Marimba takes over, melodica and bass form a groove, and the piece sets off. Other pieces are also multi-sectioned, showcasing percussion – darbuka, bender, and tar, all crisply keeping time – or Cagean chance. Accroche Note achieves an approach that is neither modern classical nor freely improvised, but is drenched in elements of both."
- Jazziz

"This concert from 1995 reflects the lengths to which Accroche Note will go to keep the timbral shifts of vocal and instrumental collaboration flowing. From a very loose read of "Tierkreis" by Karlheinz Stockhausen to "spontaneous compositions" by Kubler and Angster, what flowers from the middle is usually dictated by an idea from one of the pair, refracted through a tonal prism to capture a series of notes in between one place and another, and the combining of those same notes in new ways until another series of them is found and refracted further, creating an improvisational framework that relies neither on dynamics nor drama to achieve its ends. Is it jazz? Is it new music? What are they trying to say? Who cares — they already said it. With a humorous grace and controlled approach, Accroche Note opens sonic worlds of light and shadow with a method that relies not on musicality but on an intuition for music itself."
- All Music Guide

Recorded live by Holger Scheuermann and Jost Gebers on June 16th, 1995, during the Workshop Freie Musik at the Akademie der Künste in Berlin.