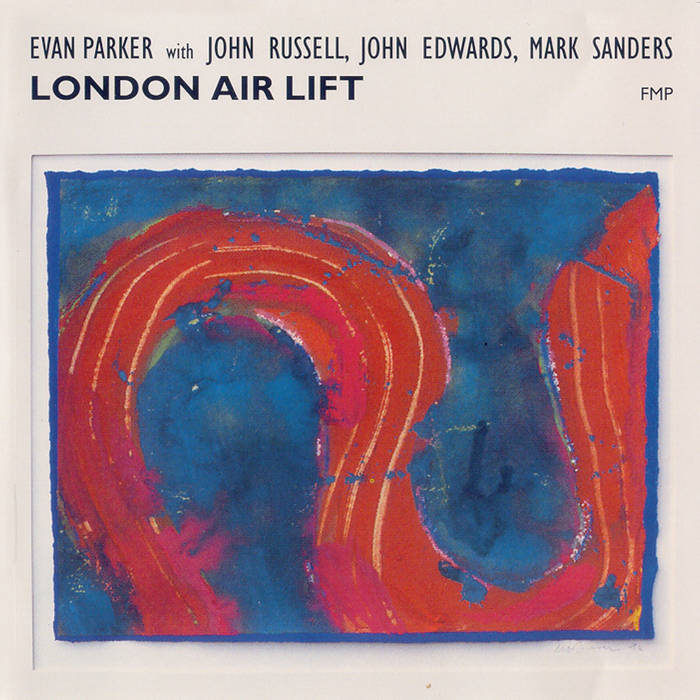 All music by Parker, Russell, Edwards, and Sanders.

REVIEWS
.
"London Air Lift is a brilliant example of British free improv done by a group; there is much excitement, and plenty of fireworks, but at no time is the music here inaccessible or overtly confrontational. Instead, it almost literally invites the listener into a series of deft, engaging conversations." - All Music Guide, 4 Stars

"Who’s the most highly respected figure in the field of free improvisation? It could be British saxophonist Evan Parker, who has devised new techniques and forged an individual perspective on spontaneous detail and structure that balances coherency and surprise. On London Air Lift he debuts a new quartet – with acoustic guitarist John Russell, bassist John Edwards, and drummer Mark Sanders – that finds complementary sonorities in pointillist gestures, carefully measured dynamics, and close-knit microtonal harmonies. On extended performances like “Fly Vision” and “The Drop” the quick movement of Parker’s improvisational line is breathtaking, as he magically alters the pressure and weight of his notes to dovetail with the guitar clicks and drum patter, building kaleidoscopic passages of tension and release." - Art Lange, Pulse

"On London Air Lift, we find drums, bass, and guitar setting up a surging, fluttering, and rattling that sends Parker to a different place – an Anglo-European place to be sure, but one that has more than a family resemblance to what we now rather quaintly refer to as jazz. John Russell (guitar), Mark Sanders (drums), and John Edwards (bass) are undeniably a rhythm section, interlocked to the saxophone in a completely familiar manner. And more than ever before, Parker’s link to Rahsaan Roland Kirk and even to Lester Young comes to the fore. No, don’t expect to hear “Topsy”, but there is a fundamental pulse here and a striding across and against it that could come from nowhere else in the tradition. This is some of Parker’s best work, an affirmation of human craft and mastery." -John F. Szwed, Jazziz

"Parker’s probably peerless abilities on saxophone are shown to wonderful effect on “London Air Lift”. He can sound like an entire forest of birds by himself, so he doesn’t need much (or even any) support to produce splendid music, but here he is well served, particularly by Edwards, whose meaty bowing often provides beautiful backdrops for Parker’s incredible twittering. Cutting edge music doesn’t have to lack drive, and Edwards never lets this album get too precious. It may be sacrilege to say so, but I think he actually provides better accompaniment to Parker on this recording than Barry Guy. This is a shimmering work of art." - Cadence