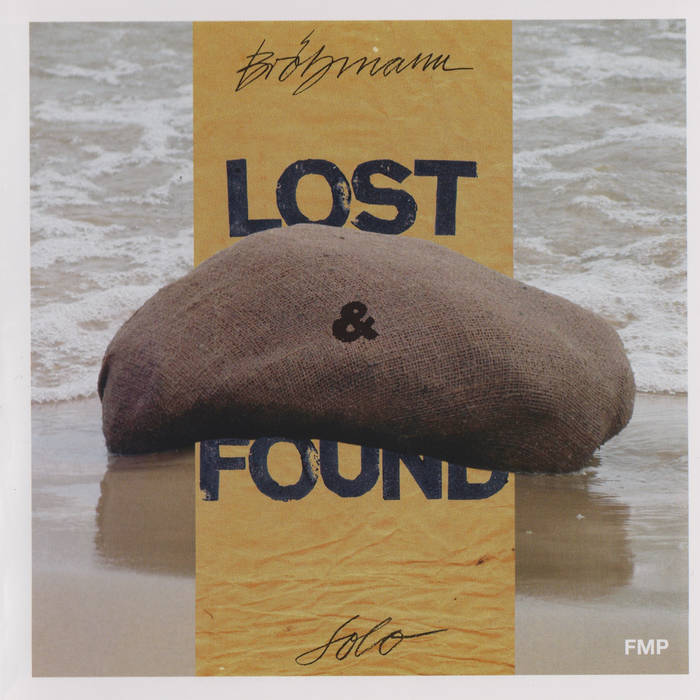 All music by Peter Brötzmann.

"Classic Brötzmann and ranks among his very best outings on the horn, a captivating and surprisingly refreshing squall."
- Point of Departure

"Some of my favorite performances by Brötzmann have been solo concerts - after more than two decades of hearing him live, I was blown away last March by a solo show in Sweden. The set captured on the recent Lost & Found is just as good. It covers his full expressive range, including bulldozer power, squalls of overblowing, upper-register difference tones, and surprising delicacy, from the B-flat clarinet flutters and bluesy melodic fragments on the title track to the breathy extrapolation of Monk's "Crepuscule With Nellie" in the middle of "Got a Hole In It."
- Peter Margasak, Chicago Reader

"Recorded at the Nickelsdorf Konfrontationen in the summer of 2006, the record hearkens back to his 1976 solo effort in keeping the action within the confines of an LP. Five improvisations ranging in length from a quarter-hour to just over three minutes serve as fertile vehicles for four of his horns. Nearly half the program is dominated by his alto, a horn that often plays backseat to his tenor in other contexts, and it’s an invigorating change in focus."
- Derek Taylor, Dusted Magazine

"'Lost & Found' is a powerful and direct solo offering. Right from the opening salvo, Brötz is digging in and making his presence known. This is a splendid solo offering that will pick you right up and take you along for a joyous ride."
-DMG Newsletter

"Five solo pieces ranging from demonstrations in strength and stamina to near-romantic lyricism. The man still has lessons to teach, and he still has the power to move you.
- Francois Couture, Monsieur Délire

"Brötzmann’s latest solo outing – his first solo live recording – showcases an artist utterly at ease with his muse. Switching from alto to tenor, clarinet and his now familiar tarogato – a traditional Hungarian relative of the clarinet – he doesn’t force anything; he simply plays. He cuts between the searingly loud overblowing that he’s famous for and excursions into ruminative tonal playing, even hinting at a swampy New Orleans dirge for a portion of the title track. What the listener hears as a signature style is not a theoretical construct but something that arises naturally from the meeting of this man, with these tools, in this space."
- Keith Moline, The Wire

"Brötzmann's throaty sound conveys an emotional range rarely touched on in jazz of any kind."
- Paristransatlantic

"If it hasn't been said before that Brötzmann's approach to the clarinet is as unique as that of anyone on this planet then it can be said here. On the title track, his tone is singular enough to suggest another instrument altogether, whilst his lyricism, something which again is often not apparent in his group work, also comes to the fore." - All About Jazz

"Brötzmann is remarkably adept at spontaneous invention and textural variation. Listeners should feel free to surrender completely to the wonderment of the coiled helix of successive moments that make up this 47-minute recital. Lost & Found would serve as an excellent introduction to Brötzmann's individual technique. Precedents for this solo album include 14 LovePoems Plus 10 More (1984), No Nothing (1990), Nothing to Say (1996), and Right as Rain (2001). Each of these is well worth investigating to savor in comparison with each other or in vivid contrast with Brötzmann's sizable catalog of ensemble recordings."
- All Music Guide