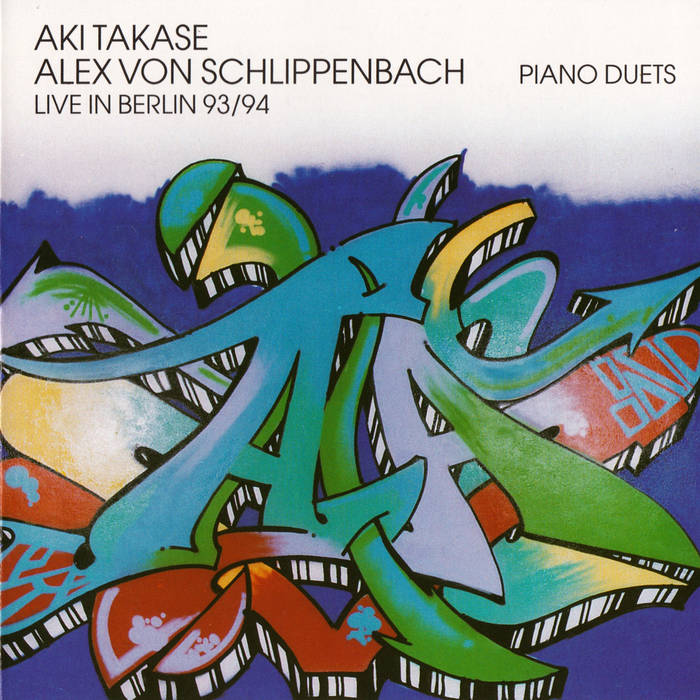 "There is very little to write about a recording as brilliant and passionate as this one. While the duo of Takase and von Schlippenbach had been together for 20 years, these two sets, chosen from gigs in April of 1993 and December of 1994, are its first issued recordings. These two pianists, whether executing their own compositions, those of Frank Zappa, or Thelonious Monk, on prepared or untouched pianos, are as fiery and slippery as they come. Both are lightning-quick improvisers, speaking in many tongues — often simultaneously. All of the selections found here blur all boundaries of what genre claims to communicate. What is left is music, a sonorous organization of vibration in the air. Given the dramatic flair of the pair on Zappa's quirky and humorous "You Are What You Is," which breathes fire into the opening theme from Hawaii Five-O, and is played with seriousness and sophistication. But then it bleeds so subtly into the Monk medley of "Mysterioso," "Pannonica," and "Evidence," one would swear it was an absorption of several modes of harmony that lie in the heart of the Monk pieces. By the time these two reach their virtuoso solos, there is no doubt that the entire recording is one, all tied together yet expansive and calling into the world for more to be brought before them that they might integrate each work into a framework without a frame. The listener is left literally breathless, unable to relax yet unable to move, except maybe toward the stereo to hit "repeat."
- All Music Guide

"Points of entry abound in Piano Duets – Live in Berlin 93/94 by the married team of Aki Takase and Alex von Schlippenbach. Frank Zappa’s You Are What You Is is more funky than you’d expect from either the composer or the players. The two-piano version of his The Morlocks and her Chapelure Japonaise deploy two prepared pianos for blistering mechanical boogie woogie and other metal delights. A playful duet on Misterioso introduces a little Monk medley with two reflective solo turns. Takase’s Tales Of Something winks between the silences. There are worlds in worlds here, dive deep."
- Coda

"Though they’ve created their own careers separately – Takase as a solo artist and Schlippenbach as a key figure in the turbulent European free jazz scene – this wife-and-husband piano duo finds plenty of complementary space to work in. There’s a Monk medley and an easy-going Zappa tune, but the real thrust of the music occurs in the four self-penned pieces, where they can prod and poke each other’s lines, one supporting with a sturdy bass line or cushion of chords while the other leads into uncharted thematic territory, all the while unafraid of a random stride phrase or dissonant episode. On “The Morlocks” and “Chapelure Japonaise” they “prepare“ the strings of one piano in a riveting “ballet mechanique” of clangs and rattles."
- Art Lange, Pulse