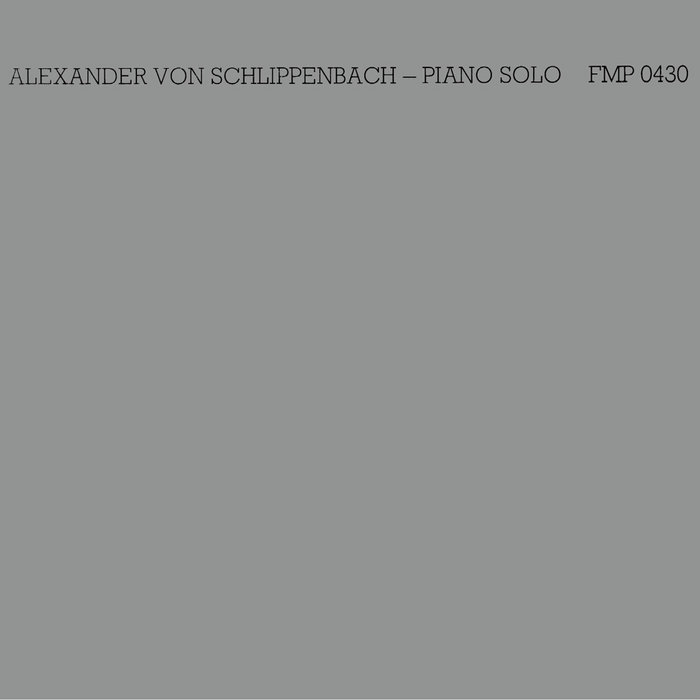 All music by Alexander von Schlippenbach.

"A fine set of early solo pieces by the great Alexander von Schlippenbach. The pianist is heard here in a state of youthful, perhaps even desperate, exuberance over the course of four pieces...."
-Kurt Gottschalk, The Squid's Ear

"...demonstrates Schlippenbach’s overwhelming diversity and lyricism in a tradition he has celebrated throughout his long career. The disc whirs into existence with the cascading flurries of 'Brooks,' delicious downward spirals vying for prominence with block chords and clusters that invoke some of Cecil Taylor’s solo material. Yet, Schlippenbach’s allegiance to the jazz tradition is evident in the way little motifs coalesce into long flowing lines; they arc, merge and diverge with the stunning clarity of free bop. The occasional silence is breathless, preparatory only for the next series of vertical dyads or another linear traversal of the keyboard.... a stirring album, intensely muscular and lyrical by turn. Its return to the catalog is cause for celebration."
-Marc Medwin, Dusted Magazine

"...the sustained hammer-bustin’ torrents of 'Brooks' and 'Lhotse' are riveting examples of Schlippenbach’s virtuosity.... Schlippenbach seems determined to get beyond the shadows of free jazz and post-serial composition, and not just splice their genes together. He is particularly successful in the two versions of 'The Onliest – The Loneliest,' where he uses quirky Monk-like rhythms to animate sparse motives, which he then elongates into scurrying right hand lines, blunt-force chords and thunderous bass figures played in octaves. "
-Bill Shoemaker, Point of Departure

"Fierce and outwardly chaotic though some of these exercises are, the abiding impression is of form and structure albeit somewhat below immediate audibility. More than just a period piece, this offers important insight into the evolution of a major European musician."
-Brian Morton, The Wire

"Piano Solo '77 is an intense ride through the instrument's paces, the record's austere gray cover giving little indication of the secrets contained within."
-Clifford Allen, All About Jazz

Recorded by Alexander von Schlippenbach and Jost Gebers February 18th to 21st, 1977, at the FMP-Studio in Berlin.

Note: the CD edition/compilation represented here combines the original LP (FMP 0430) and adds one track -- "The Onliest - The Loneliest 2" -- which originally appeared on the Globe Unity Orchestra LP "Pearls" (FMP 0380).