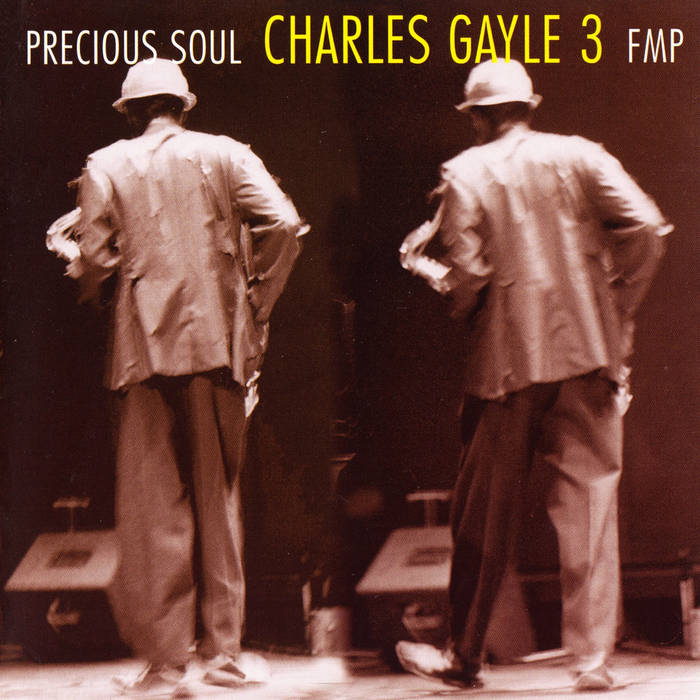 All music by Charles Gayle.

"Precious Soul was recorded on two consecutive nights at the Total Music Meeting festival in Berlin in November 1997. Charles Gayle alternated between tenor saxophone and piano, and was accompanied by his regular sidemen at the time, bassist Gerald Benson and drummer Gerald Cleaver. The CD begins with "Delight," over half an hour of continuous music of sustained interest. Gayle's voluble free saxophone playing is backed by a very swinging rhythm section. The first minutes of "Your Grace" features a delicate bass solo. The closing piece, "As Yourself," finishes where "Delight" started: hot, swinging free jazz. Precious Soul delivers the goods." - All Music Guide

"On Precious Soul, Gayle gives a performance masterfully controlled, thrusting himself into regions bound by fine distinctions and subtle lines. He has been criticized for dabbling in secondary instruments (think Ornette Coleman on violin or, more recently, Anthony Braxton on piano). But here, playing piano on “Honour” and “Oh God”, he’s remarkable sure, and notably impressive. Whether it’s the surprising array of tricks, or the allusions (Cecil Taylor even McCoy Tyner in spots), Charles Gayle – the pianist – commands attention. Indeed, Benson and Cleaver seem inspired by his pushing and pulling, quick stutter steps, and bounty of jagged chords. It is Thelonious Monk’s world transported into the early twenty-first century. Like Sam Rivers’ piano ventures, these are singular and delightful snippets of what must be an altogether independent interest and talent. Ultimately, Gayle’s piano work is simply another manifestation of his relentless curiosity – impelling his running inquiry into content and form." - Cadence

"Gayle still finds new methods of stating his thoughts and convictions that are unmistakably and irrevocably his own. This time the trio is different than those featured in past recordings for the label. In place of Vattel Cherry and Michael Wimberley are the new faces of Gerald Benson and Gerald Cleaver and the change in composition signifies a very noticeable shift in sound from the opening strains of the “Delight.” Cleaver's drums rise out of a dynamic range that is startling in its depth and diversity. Moving from scuffling brushes to tightly trained stick play his patterns are like a patting caress on the knotted head of Gayle's horn. Gayle butts and whinnies but the fervor boiling just inside the long throat his bell seems largely placated and he even strays into snatches of lyricism against the unexpected leash. Benson's throbbing lines are similarly reposed and the piece doesn't catch fire for several minutes leaving a full-on conflagration a long time in building. But far from being a hindrance the uncracked space and dimensional breadth plumbed by the three creates an unusual and fresh pigment in Gayle's sonic palette, one of measured and textured restraint. Sections of the closing “As Yourself” even sound almost playful as he bandies about melodic swatches over a churning rhythmic tide. His forays on piano on “Honour” and “Oh God” are equally in check often dancing along cleanly articulated lines. In the liner notes to Berlin Movement Future Years, one of his earlier FMP recordings, Gayle is quoted as stating, “When the building is still standing in the end, we've failed.” On this date, recorded several years later, he seems to be after the same thing, but intent on achieving it through far more subtle and subversive means. Instead of assailing the pillars of the venue and the audience with intractable intensity he erodes them with anodyne ardor and deftly funneled dissonance." - Derek Taylor, All About Jazz

"The opening "Delight" is a perfect example of his no holds barred expressiveness. At over thirty minutes in length, "Delight" is not for the faint of heart, but for aficionados of free music, it is a delightful half hour, filled with an outpouring of emotion from the tenor saxophonist, as he struggles with the inner conflict within us all (Gayle just does a damn fine job expressing it on the tenor)." - Jazz Weekly

Recorded live by Holger Scheuermann and Jost Gebers on November 5th and 6th, 1997, during the Total Music Meeting at the Podewil in Berlin.