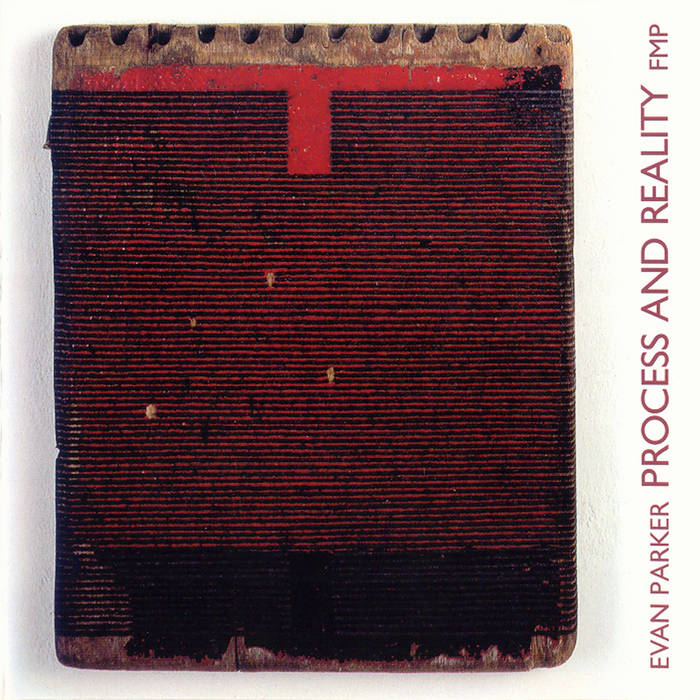 All music by Evan Parker.

"Like his namesake (Charlie, that is), British reedman Evan Parker is an innovator; by developing over the past two decades a phenomenal new instrumental approach and attitude, he’s as revolutionary and prophetic as was Bird. This disc of overdubbed solos, his first, is a departure from his acutely “free” improvisational philosophy, altering both the music’s process and the illusory reality of our experiencing it. The brevity of the pieces emphasizes their individuality – the ironic “electronic” sounds of “Mothon”, the percussive eight saxes on “Blindflight”, the haunting ballad “Diary of a Mnemonist”, the splintering jig in “Broken Wing”, the edgy swing on “Bands (O.D.J.B.)." The staggering intricacy of Parker’s motifs and patterns oblige complexity, but there’s nothing mechanistic about it; the variations can be labyrinthine, or as comforting as a flock of butterflies." - Art Lange, Pulse

"Speaking of abstraction and virtuosity, Evan Parker’s Process and Reality is all that and a bit more. This disc is a showcase for his solo soprano sax technique, which includes an 'alternate language' of cross fingers, circular breathing, tonguing patterns, a stunning use of overtones, and what can only be described as sheer speed. Starting fairly simply, Parker builds tension over the 65 plus minutes of the program. A staggering achievement." - CODA Magazine

"This is Evan Parker's first album using multi-tracking technology and using the studio itself as a concert platform to capture, in the flux of the moment, the permanent sound. Process and Reality is comprised of short pieces, 16 of them in fact. All but one are improvisations on the notions of the sonic, harmonic, and timbral thematics Parker was exploring at the time of this recording, and one is an improvisation based on Steve Lacy's "The Cryptosphere." It is an essential recording for anyone interested in improvised music." - All Music Guide

"Process And Reality demands attention. Parker is an artist of considerable intelligence and integrity, one of those masters of improvised music who has never drawn back from trying yet another walk across the abyss of potential chaos or humiliation. Not only does he disdain the use of a safety-net, he frequently gets over without even the tight-rope." - The Wire