by TRIO TRABANT A ROMA 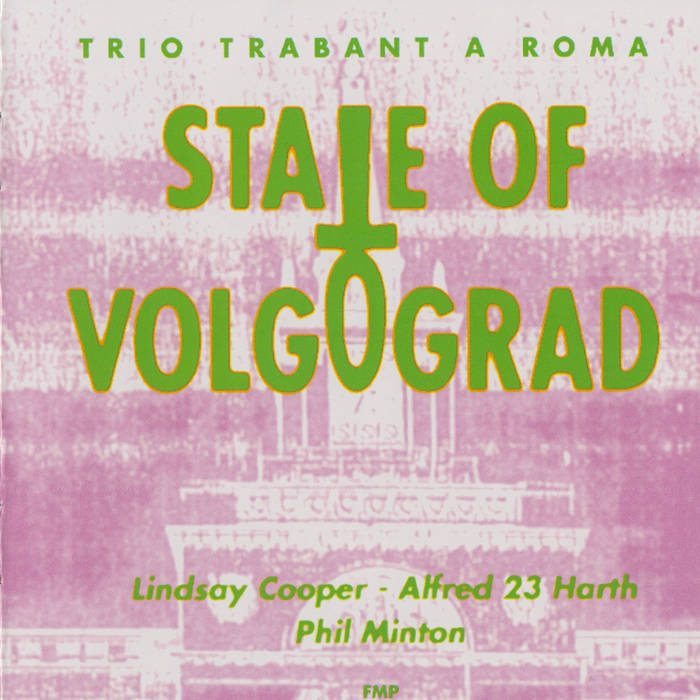 "This small ensemble was short-lived; yet ‘State Of Volgograd’– the solitary official release – shines among the unconditional masterpieces of improvisational skill, a career landmark for everybody involved. Trio Trabant A Roma stood apart from anything else. Three masters of the respective crafts in a setting that, quite impressively, leaves the individual silhouettes easily discernible while defining their union as one of the finest collectives carved in your reviewer’s memory. This recital, captured at Esslingen’s Dieselstrasse in 1991, is informed by an intelligent use of technology, especially inventively warped sampling and discreet looping. The tracks span across a number of moods and circumstances. The whole album is a glorification of total musicianship and an ode to reciprocal listening permeated by equal doses of joy, sorrow and childish astonishment. Trio Trabant A Roma must be placed in a hypothetical Hall Of Fame of sonic originality. A combined vision that, now as then, guides the listener to a superior level of interaction with the unusual acoustic phenomena that only certain ambits of musical exploration can elicit." - Temporary Fault

"This is an inviting, engaging recording with a dash of flamboyant cabaret. It is also much more. A key feature is the superb control over its instrumental resources, divided between electronic an acoustic. Most exciting to me are those sections where the different voices seem to be under the control of some other force entirely – breaking down, cutting out and letting mechanical hiss or chatter cut in. Throughout, the use of electronics is very interesting – emphasizing, not disguising, it’s mechanical repetitive tendency, but with such force and energy that its strangeness is only heightened not weakened. This is where control and a certain distance in the playing pays off, enabling the set to grow from a cool irony through soured melody to a devastating and ferocious immediacy towards the end of track three, where maximum density is achieved and voice and machine fuse. Extremely powerful."
- Rubberneck

"Trio Trabant A Roma are Lindsay Cooper, Alfred 23 Harth and Phil Minton, three of the most eclectic European avant gardists around. Despite the enormous scope of their previous work, State Of Volgograd strikes me as something of a departure in terms of the sense of unhurried unpredictability which pervades these five improvisations. The two 20 minute pieces are especially rich in dynamic contrasts and imaginative fusions of jazz idioms and abstract playing. With Cooper and Harth sometimes multitracking and looping their reeds as they play, with the aid of sampling devices, any conventional notion of ‘real time’ improvising breaks down. In Cooper’s hands the bassoon sounds strangely archaic and yet strikingly modern. Minton’s distinctive vocal contributions range from the near shamanic to songlike snatches. As the set continues, electronic keyboards shape more of the atmosphere the ebb and flow of Harth’s Farfisa sequence on “Et All Ways Budapest” is an unexpected treat. This is adventurous work from a great trio with a sense of humor."
- The Wire

"The five selections that make up this work are improvisations worked out conceptually in advance by the trio. The most notable of these works is "Orbital Tent," where Minton's deep baritone voice winds its way down into an edge between Cooper's keyboards and Harth's sopranino saxophone. Also notable is the gargantuan "Main Movies et Negentropical Territories," a soundtrack for your nightmares where war cries, echoes of Ornette Coleman, and tape loops all interweave and collide. This is improvisation of a very high order. The minimal "Beyond Cut," which closes the disc, provides an encore aspect to this performance. Harth and Minton pair in shimmering squeaks and squawks, quoting from the greats of jazz past as Cooper treats everything electronically and then does her own bit of jazz homage. Beautiful, funny, and outrageous. What more could you ask for?"
- All Music Guide

"The 20 minute “orbital tent” starts out a bit tentatively as they each enter, but by the midpoint, a swirling intensity is built as a stuttering processed bassoon line is woven with Minton’s guttural chattering and screeched harmonics, swelling piano, sliding modulations of electric keyboard chords, and a cutting soprano. This slowly fades into a plaintive melodic tenor line that closes the piece. By mid-set, they have developed a lush momentum of collective force as the three merge into a unity where it becomes difficult to dissect the music into three distinct voices. The resulting music can have the evolving scope of “main movies…” with its movements through spare sections countering singing bassoon lines with sheets of electronics or building chattering percussive lines out of the amplified sound of sax keys clicking. This almost hyperkinetic momentum is contrasted with the hypnotic dream-like effects of “Strasbourg et amor…”. The set finishes off with the mutant blues of ”beyond cut” with Minton crooning the lyrics of “Another You” against dual jabbering reed lines which fades into echoing scat."
- Cadence

Recorded live in October 1991 at Dieselstrasse in Esslingen.