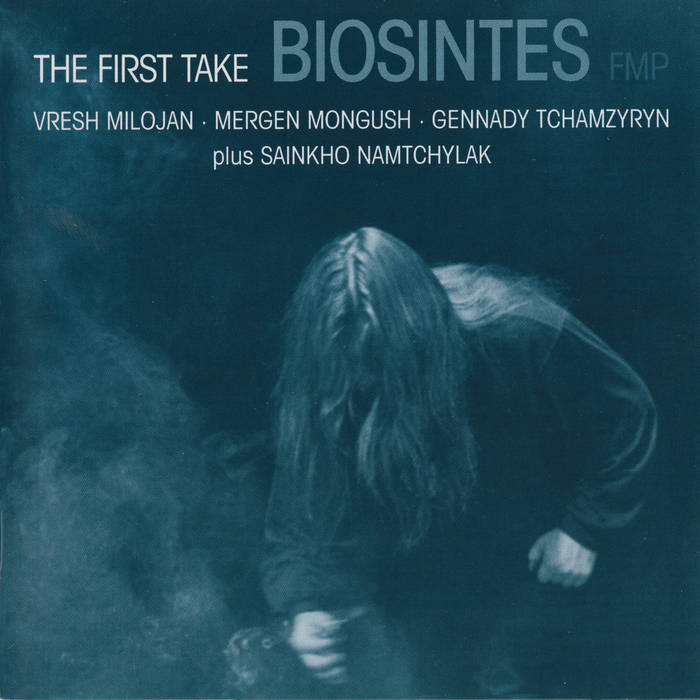 "This is very unusual music that sounds very ancient and timeless. At times it sounds as if one is listening in on some shamanic ritual. But, it’s also music that could have only come to the world in the late 20th century."
- Cadence

"Biosintes, a Tuvan group comprised of Tuvan, Armenian, and Russian musicians that primarily played Tuvan music for Tuvan audiences. Originally a septet, the group later became a trio. Founder Vresh Milojan, an Armenian poet, painter, and theater director, Mergen Mongush, a native Tuvan, and Gennady Tchamzyryn, a fellow Siberian, form the Biosintes trio heard on this release. The session was recoded live at Berlin's Total Music Meeting in 1994, and provided an opportunity for the audience to hear the deeply rooted ancient music of Tuva. That this music is as deeply rooted to improvisation made it easier for the audience to hear the old and new songs done in a style almost totally unfamiliar in the West. Throat singing is as old as the tiny Siberian nation itself. It has its roots in Tibetan Buddhist chant, folklore, and sacred shamanistic rites and rituals. From the first moments of the steel drums and deep-throated moans of "Noon to Midnight," to the grunted improvisation in its middle, to the tribal drums, the effect is riveting, rooted to eternity and to the rich soil in the earth. On "Metabolism," the Jew's harp sounds a familiar tone before rattles and groaning, hushed moans, and vibrational chants cover the performance ground. Strings, as alien sounding as anything else here, add to the mystery as falsetto voices begin to cry and scream in the spatial din. This is Total Music. Overtones between voices, microtonal improvising between instruments and abandonment of all notions of scale and structure create a music that is purely musical. Everyone interested in free improvised music, Asian or Russian music, historical folk music, or avant rock & roll should be required not only to own this record but to spend two hours a week listening to it, until their hearts expand far beyond the reaches of their bodies."
- Thom Jurek, All Music Guide

Recorded live by Holger Scheuermann and Jost Gebers on November 18th, 1994, during the Total Music Meeting at the Podewil in Berlin.

Mixed and mastered by Jonas Bergler.
Produced by Sainkho Namtchylak and Jost Gebers.