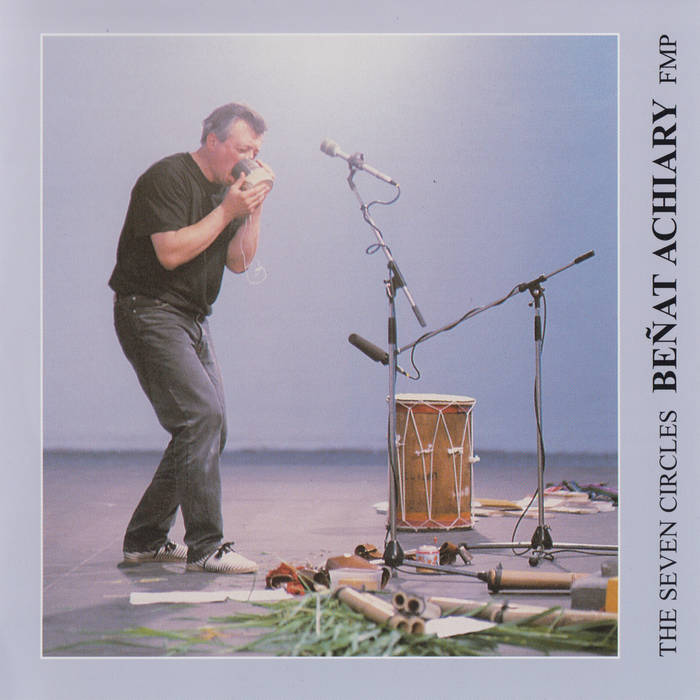 "One of Beñat Achiary's best recorded solo performances, period. The Seven Circles captures the mad Basque vocalist in all his glory. Sound quality is perfect on this live recording: every inflection, every small percussion instrument Achiary uses makes it clearly into the microphone, finally giving an exact reproduction of his "larger-than-life" performances. This concert took place two months after the death of bassist Peter Kowald. It could be seen as a 45-minute exorcism of his death, a personal and collective ritual in order to come to terms with his loss. "Pansori for Peter" is an atavistic mourning song, a soul-shattering sequence of cries, sobs, complaints and revolts. Achiary goes through the whole repertoire of human emotions and, when that is not enough, borrows from the animal kingdom in order to express the inexpressible. "Chant d'Exil" and "Pigalle" are more soothing and showcase the purity of the singer's voice. "Nuit Sans Sommeil" comes back to deeply troubling emotions, before "Lullaby for Peter" offers resolution and "Fandango" sends us off on a happier note. Unlike Phil Minton or Jaap Blonk, Beñat Achiary's vocal art relies more on lyricism and feeling than innovative techniques. On this recording, he tears down the distinctions between what is avant-garde and what is popular. His lyricism and powerful lungs jump beyond cultures and styles, providing to the human spirit a universal voice."
- All Music Guide

"Basque vocalist Beñat Achiary is a remarkable soloist, with or without his arsenal of rare folk instruments and percussion, and this live recording from 2002, which finds him interpreting texts by various poets along with four of his own compositions is a homage to his playing partner Peter Kowald, recorded as it was just a couple of months after the bassist's sudden death. Achiary’s interpretation of "L’Anti-toi" and "La Voie Lactée" by Gherasim Luca (hailed, incidentally, as the greatest French poet by Deleuze and Guattari, of all people) is fragile and sensitive, but the following “Pansori for Peter” is a hard bite. It starts with an animal wail and develops into Tuvan drone, sounding remarkably like Fred Frith’s prepared guitar of late 1980s – and all that in the first minute. On “Chant d’Exil” Achiary goes to the limits of both vibrato and circular breathing, with an occasional James Chance scream thrown in for good measure, while Jon Mirande’s “Pigalle” is more elegiac and jazzy. The traditional Balearic “Harvest Song” is sung in the dialect and accompanied by the droning stove bass, and the following “Nuit Sans Sommeil” manages to incorporate verses from Charles Mingus’ “Freedom”. Of the many tributes to Kowald that have appeared since his death, this is one of the most touching."
- ParisTransatlantic

"Two years have passed since the premature passing of Peter Kowald. His departure was sudden, the rift left by his demise deep. Testaments to his stature, tribute projects continue to trickle into circulation. This recent FMP release represents one of the latest emblems of esteem. Working his cheeks like bellows and using his palms as baffles Achiary presses choppy streams of air through tightly pursed lips. On “Pansori for Peter” the resonances in his throaty ululations recall the basic dynamics of throat singing. Not the otherworldly pitch control of Tuvan strains but a more primitive and coarse hewn terrestrial variant. At one point his garrulous glossolalia sounds like a strange cloning of an agitated Kabuki character with a chanting Navajo shaman. Towards the close he places some sort of membrane covered hand drum over his mouth to create droning overtones. “Chant D’Exil” joins soaring Cantorial-like singing to the tether of a brittle fluctuating drum beat. His voice turns lilting and fragile for “Pigalle” bobbing atop a spidery lattice of djembe tones before suddenly breaking into boisterous scat. The percussion is frequently incidental, save on tracks like “Harvest Song” and “Nuit Sans Sommeil” where friction-fed drones underpin other free-associative bouts of oral acrobatics. On the latter Achiary delves into a deep African American spiritual groove. Like its source of inspiration this music adopts a free range perigrinary spirit without equivocation. As Achiary aptly and poetically notes Kowald’s absence is a presence, an entity that will exist for many years to come."
- Derek Taylor, Bagatellen

Many thanks to Peter Neuhauser, Wolfgang Wasserbauer, Stefan Haslinger.