Too Much Is Not Enough 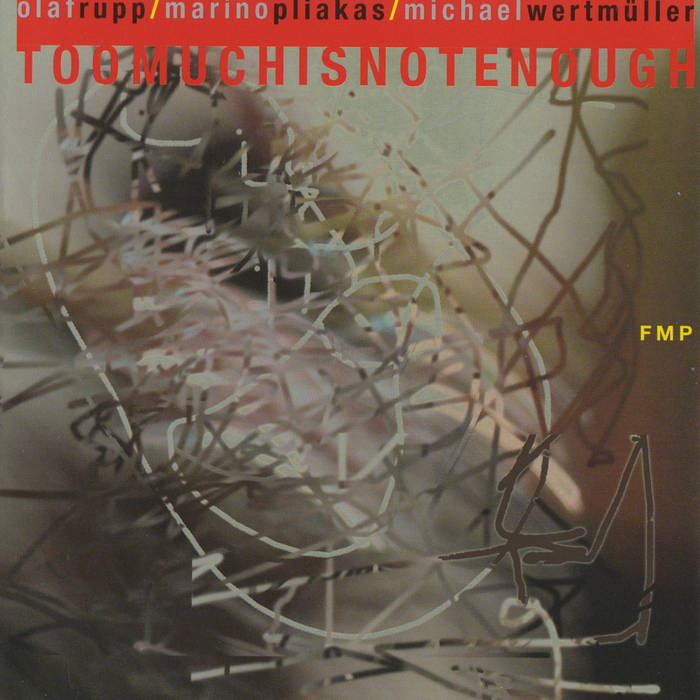 "This metallic trio's impact may superficially appear post-punk. It's actually pre-punk, the rancorous electric offspring of still unassimilated European free blowing, the clangorous progeny of Brötzmann's Machine Gun. Behind the confrontational tone there is the Blakean awareness that the road of excess can lead to profundity."
- The Wire

"Rupp, Pliakas and Wertmüller create music that sounds frankly combustible. For the most part, they give the impression that they are standing at the center of a kind of storm of metallic particles, with each barrage of notes, each sweep, each flinty effect sounding like they’re being drawn to some sonic magnet. They shriek and create Nels Cline-like flurries on “Adito I“, they merge with buzzing intensity and tuned metal on “Speed Swing”, or they stutter jointly on “Stoppare”. I’m impressed by how much detail and empathy there is in this cascade of metallic noise. On “Stare Da Dio”, Wertmüller shows how adept he is with Baby Sommer-like rolls. And Pliakas’ long rubbery lines are key to holding together the scrapes and serrations of the lengthy closer. Even on quieter pieces like ”Boeller Ballade 1”, the trio is working with density, as complex tom patterns and little mechanical hiccups lace together. But the disc is really about those huge clouds of sound that open up and rain on your head. Deliriously fun."
- Cadence

"There’s no denying the punch of this record. Bassist Marino Pliakas and drummer Michael Wertmüller form a thunderous free-rock rhythm section: energy-driven, pedal-to-the-floor unstoppable. High-energy-type music, where subtleties happen behind the wall of sound, rarely in front of it (the title track being an exception). Fans of Robert Fripp, take note that Rupp’s playing has an angular side to it that strongly brings to mind Fripp circa 1972-1974. A good record, more nuanced than your first impression might lead you to believe."
- Monsieur Délire

"Although the playing is free, it is quite focused and exciting. The trio is tight and they move in waves together, often at a furious pace. There is a natural flow to the way things unfold on this disc. There are haunting dark melodies buried beneath that surface of noise. All three of these musicians are strong improvisers and an integral part of the trio; each helps to determine the direction. This is an immensely satisfying and more diverse than one might imagine. Brutal beauty, it seems to me."
- Bruce Lee Gallanter, DMG Newsletter

"An association that came to mind during one of the repeated spins was Last Exit. Too Much Is Not Enough vibrates in fact of the same devastating fervour that kind of take-no-prisoners attitude imbued both with technical expertise and utter abandonment of pondering that characterizes the milestones of free improvisation, a category to which this release definitely belongs. Rupp shows that his playing on the electric is abundantly superior to what he does with acoustic, scathing lines and sparkling harmonics defining an imperative: that of meaning plenty and thinking less. In this case the success is total, enhanced by Pliakas’ massiveness on the bass and Wertmüller’s frantic drumming, characterized by a splendidly snappy snare amidst perennially rolling avalanches. Together, the musicians reach a point of continuous boiling that nevertheless doesn’t generate an explosion that would, in a way, waste that accumulation of forces. One of those recordings that, listened by a walkman while strolling across the city, put at risk of being hurt by the upcoming vehicles if inadvertently crossing the road, given the impressively discourteous, utterly involving manner in which it transmits the message and the unconditional value of its uproar. Great stuff – and look at the traffic lights before someone runs you over."
- Touching Extremes

"When you think you've heard it all, there is always a step which goes beyond expectations. This album comes without warnings for your health, and maybe it should."
- Free Jazz blog

"The album is extremely enjoyable at dangerous volume through headphones."
- Paris Transatlantic

"A collective of admirably insatiable curiosity."
- All About Jazz