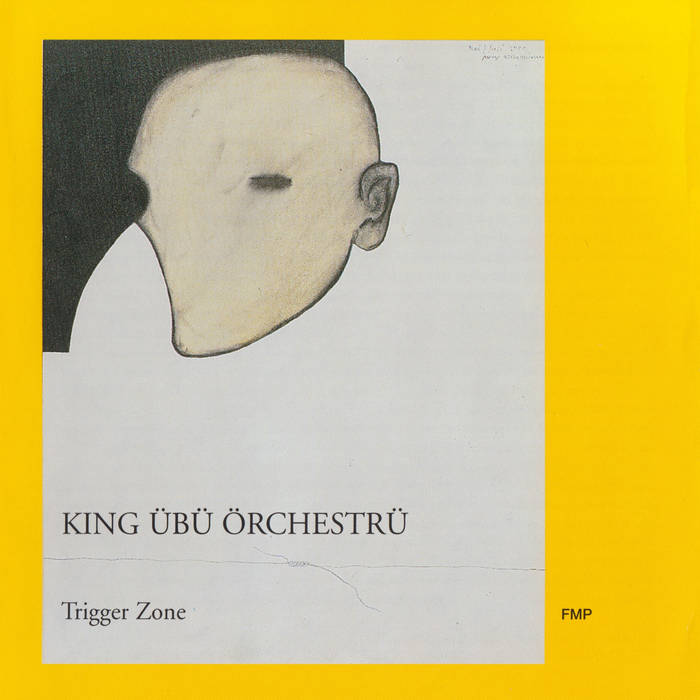 "While this is a large free ensemble, this new recording like the last maintains Fuchs’ attention to delicacy and detail. Trigger Zone is a quiet recording, static and slowly evolving, largely denying individual solo statements in lieu of the creation of a group sound. Electronics are used seamlessly with acoustic instrumentation, and the musicians all explore the intensity and concentration of quiet and space. This is over an hour of abstract ensemble music, fragmented, committed more to the total ambience than to statement, but filled with energy and tension. The ensemble does a most remarkable job of avoiding the free music cliché of crescendo / decrescendo to propel the music forward. Instead Trigger Zone seems to succeeded at its stasis and remain delicate and momentary and present for 68 minutes. A leading example of what this kind of group can achieve in this kind of setting."
- Cadence

"King Übü's music is all about collective improvisation, not soloing, so the best way to deflect individualism is to create at such low volume that sounds merge into an organic whole.The best parallel to what goes on here could be those immense poster-like pictures created by the masses in Chinese stadiums. Individually the portion of the illustration each person holds resembles nothing much, but when the thousands of pieces are put together, a mammoth poster results. If anything, in fact, this CD, the bands first since 1992, is even more focused than the last one. With every movement seemingly Lilliputian, the best way to appreciate what's going on is to turn the volume of your sound system up about 20% louder than usual. What is happening is the creation of an entire symphony of small gestures and sounds that you may at times not be able to connect to any particular instrument. This disc is surely one that should be examined by anyone interested in the evolution of modern improvised sounds."
- JazzWord,

"Although the King Übü Örchestrü was formed in the early 1980s, Trigger Zone is only its third album, recorded nearly three years ago. Thriving on tiny, pianissimo movements, the group’s sound is characterized by delicate textural shifts rather than the rugged verbosity of many large improvising groups. In his sleeve notes, Peter Niklas Wilson suggests that the Örchestrü’s reliance on unpitched and often anti-gestural material has enabled it to “abandon the rhetoric of European and African-American music tradition”. The music is at its best when it breaks away from traditional orchestral roles, when the group sound like they’re playing in single file, straining to get away from each other but bound by the moment. Near the end of the fourth and final track, they finally fall into line, barking like happy seals before peeling off and carrying on, each re-examining their own contribution to an unusually boisterous moment."
- The Wire

Recorded live by Holger Scheuermann and Jost Gebers on November 4th and 7th, 1998, during the Total Music Meeting at the Podewil in Berlin.