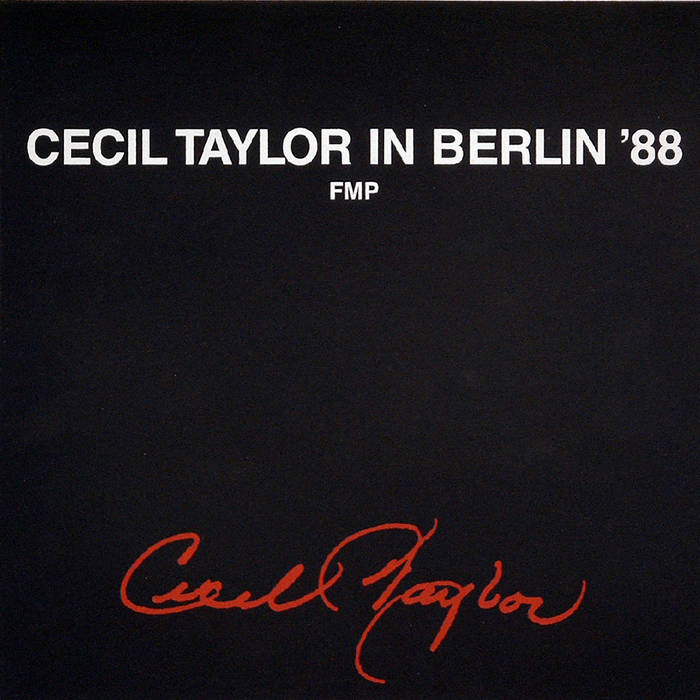 Obstacle of Affliction The music of Cecil Taylor is, in my mind, a grand codex to the hidden (occult) corners of the universe and mind. He had this ability to tap into what appeared to be chaos but in truth was not. We, the listeners, are invited to welcome the challenge of understanding his decryption. This monolithic slab of recordings is evidence of the incite and talent he possessed.
Challenging is a word I don't use lightly and this comes from a lover of extreme metal. But, without challenge life is bland.

John Cratchley This set (along with '2T's For A Lovely T') is the holy grail of Cecil Taylor recordings,I think...I was wondering how long it would be until Destination Out put this set up on BC and,at last,it's here! Expensive? Depends upon your value system (for me,this is beyond monetary issues)...anyway,feel free to stream it here from my collection.Take your time and savour this difficult but monumental achievement...I think it requires time and effort but your ears and spirit will be rewarded.

scutch38 It's been 28 years since this has been released and there still has not been anything in any form of music even coming close to this. EPIC !!!!!

THE COMPLETE CECIL TAYLOR IN BERLIN '88

We are proud to present this legendary and long out-of-print box set. One of the most important jazz releases of the past 25 years. A vital meeting of American and European jazz sensibilities. A testament to the genius of pianist and composer Cecil Taylor.

This Complete version includes LEGBA CROSSING, a limited edition which was part of the first 200 copies of the box set. It also includes IN EAST BERLIN which was recorded at the same time as the other albums but was not part of the set.

For more details about each album, follow the link to that page.

12 and 13 - IN EAST BERLIN
Cecil Taylor solo and with Günter Sommer
destination-out.bandcamp.com/album/in-berlin-88-in-east-berlin

"As a collective achievement, this stands as one of the major jazz recording projects. The apex of Cecil Taylor’s latter-day work, creating resonances and establishing links and influences which reverberate through European free playing. No collection should be without."
- Penguin Jazz Guide

“I cannot think of a more impressive presentation of newly recorded music by an artist at the height of his powers. Cecil Taylor’s Berlin adventure represents his finest achievement. A testament not only to his centrality as a towering figure in the music of the age and to the increasing accessibility of his art, but to the continued vigor of free jazz in Europe.”
- Gary Giddins, Visions of Jazz

"The old jazzcrit polemic bites the dust. No more American-versus-European or Black-versus-white rhetoric is admissible after this raging multinational celebration. One of the instigators of American "free jazz" hooks up with a succession of drummers (German, British, Dutch, Zulu) for a series of duets, encounters Derek Bailey, fields a trio with Evan Parker and Tristan Honsinger, and heads a 17-piece orchestra for a monumental performance. At the end of it all, Taylor's playing differently, and so are the Europeans. Everybody wins. Cecil Taylor In Berlin ‘88 swept all jazz polls in 1990. Rightly so."
- The Wire, Issue #100

"It all happened between June 17 and July 17, 1988 as part of Berlin’s celebration as European City of Culture. The pianist Cecil Taylor was invited over from New York for a month of concerts and workshops, including two performances by an orchestra composed of many of Europe’s leading improvisers. Ever since, the reverberations from that incredible month of music-making have spread through the jazz and improvising communities: new ties were made, old conceptions were shaken up. Many who attended reported once-in-a-lifetime experiences. Eighteen months later comes this overwhelming evidence, Cecil Taylor in Berlin 1988. A profound document, an inexhaustible trove of music. The most important statement since Art Tatum’s solo archive."
- Richard Cook, London Sunday Times

"This is quite simply the most ambitious set of new recordings ever released by a living jazz artist. It’s common knowledge that Cecil Taylor is a visionary artist but I’d say that Jost Gebers qualifies as a visionary producer as well. His tireless efforts for over twenty years at FMP are an example of his integrity and he has come up with a truly impressive release with this boxed set. I’m sure it will occupy an honored place on the shelf of every Cecil Taylor collector lucky enough to own a copy."
- Cadence

"During the 1980s, there has been no finer demonstration of jazz artists at the peak of their powers, creating sensitively together, than these discs."
- John Litweiler, Chicago Tribune

"By any measure, Cecil Taylor In Berlin ’88 is a monumental achievement. The music is magnificent, and hearing Cecil in so many contrasting settings is insightful. Most remarkable is that, despite his intransigent reputation, Taylor is flexible enough to alter his approach – sometimes subtly, sometimes radically – in order to enhance the individual talents of his collaborators. He is acutely aware of the delicate nature of group dynamics (even in a duo) and of the personalities which come into play in music of this spontaneity. Don’t misunderstand; much of the music has been composed by Cecil, but in such a way that his collaborators must devise their own role within the master plan – this forms the essential give-and-take in which Cecil exults."
- Art Lange, Downbeat

"What I’ve listened to of the set has swept me up. Cecil Taylor’s music is filled with a brittle beauty that is incomparable. His is a voice so pure, so unique and, in a way, so American that it hits your emotions with an undistilled power. Bam!"
- Lee Jeske, Cashbox

"Cecil Taylor in Berlin ‘88 is a monumental record of the pianist’s month-long Improvised Music II/88 series. Inevitably, it carries an imposing price-tag as well. What you get for your money, though, is highly impressive. This beautifully recorded box is, by any standards, a major contribution to contemporary music."
- Kenny Mathiessen, The Wire

"Cecil Taylor in Berlin ‘88 consists of over 14 hours of performances by Taylor and, taken in its entirety, makes a convincing case for those of us who regard the pianist as one of the most important figures in creative music. As he has throughout his career, Taylor in this set insists on being accepted on his own terms. Trained in the European classical tradition, he has studied the musical traditions of different parts of the world, especially African and Asian music, as well as modern poetry and dance. He draws on all of these sources in his performances. Gary Giddins has correctly identified this as the most important creative music recording of the 1980s."
- Philadelphia City Paper

"The cumulative impact of these recordings, which is predictably dazzling but also surprisingly diverse, drives home Taylor’s growth in the last decade."
- Boston Globe

"One of the great documents of modern music. If Cecil Taylor once defined the piano as tuned drums, these European players here and elsewhere sought to raise the preterite drum kit to a place in the canon and make it do the work of a string section, or a whole pit band in the case of Lovens and Bennink. There were other encounters in Berlin: Derek Bailey on Pleistozaen Mit Wasser, a trio with Evan Parker and Tristan Honsinger on The Hearth, and a solo set, but the drummers defines this remarkable occasion. Taylor sounds mercurial, joyous, infinitely playful. Though he sticks to his keyboard, he is, as Marilyn Crispell called him, “le chanteur qui danse”. There is no recording like this in modern improvisation."
- Brian Morton